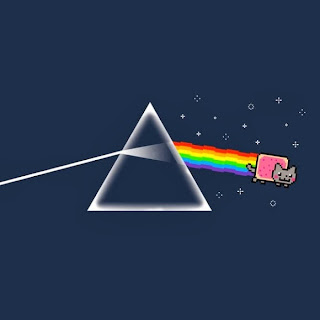 I must apologize to the gods of focused education who never crossed my mind last year during Media, a course that is advertised as your biggest in into the entertainment biz but when stripped of it's clothes is nothing but one long (unhelpful) drag.

But as any well trained psychologist will tell you: leave some slightly unhinged individuals in an inclosed environment for far too long and when you return to let them out you'll find things have gotta helluva lot of funky since you left.

What this entailed in high school form was a scrambled flurry to find the weirdest videos from what we eventually christened as "The Darkside of Youtube". I gather most of you will never have been, and after entering you may never want to go back (that's if you make it out alive of course) but it's an experience I recommend everyone to have. The videos posted below are each a good introduction to the darkside of youtube.


Don't Hug Me I'm Scared
This video is a good place to start as it's first half is about some kid-friendly characters in a jolly claymation world. Take it's descent into madness as a sign of your arrival.


Dog of Man
The greatest thing about all these videos is they exist completely in their own space. They start to play, creep you out, then end, with no extra explanation and no sequels. They aren't even satires or responses; things on the dark side very rarely have any connection to things on the outside.


Yolo
As last year started to wind down and lessons became mostly nothingness but pretending to revise Youtube became a popular pass time in a lot of my lessons. This was much broader stuff, but this gem, which was watched on dangerous levels of repeat came as a nice discovery.


Nicolas Cage Loses His Shit
Different from the other videos in form as it's a compilation not an original animation. Of course if you think that unqualifies it for inclusion then the fact is focuses on Nicolas Cage (explanation un-needed) should re-qualify it faster than you can say "pissed blood". As it starts to drone on and the clips become darker the music adds a fantastically tragic tone to it all.


Drug Bust Doody
Check out the creator of this one (or all of them for that matter) Lee Hardcastle, as he specialises in gory animations like this one, which I thought because of it's completely unjustified explosions of gore was most deserving of a look.


Going to the Store
This one has a special meaning to me as I remember watching it years ago at a friends house. I would regularly go around to his where he would show me the many weird videos he had found. At the time it felt like a creepy extension of the anime spoofs he was showing me at the time; it later got me some good rep in those Media classes.


Baaa
There's another version of Baaa which lasts for something stupid like 100 hours and like all videos of it's type is a test in irritation, while here in the minute long original the focus is on the weird ass animation. It especially freaks me out with my life-long fear of Cronenberg-esque body horror. This proves it's not just human bodies.


And the grandaddy of all that is mind shattering... Salad Fingers
It's the first of a ten part series that just messes you up more and more with each episode (it comes highly recommended from me) although it's this original episode that still stands as where all this creepy shit can be traced back to.

Hope you enjoyed (if that is the intended reaction?) these videos.
Posted by Bigplatts at 19:45