TV Show of the Year: Gogglebox 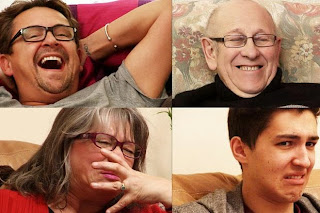 The writerly cliche of "it shouldn't work but it does" has become so overused, especially in the world of TV writing, that it's now stupid to think anything wouldn't work, even the zany, opportunist crap that a slowly dying Channel 4 has been feeding us for a while. That's why Gogglebox, a show about watching small groups of people (a good mix of demographics, of course) watch the same TV shows you probably spent your week watching, actually makes for some of the most fun TV of the year. On one side it's a social experiment about how we all do what is one of the most universal activities known to modern man, and on the other side it lets you get a quick peep into other people's domains while they've got their hair down, or they're at least acting like they do; a combination which puts it somewhere in the no man's land between high and low entertainment.

The great appeal of watching people watch TV could be traced back to that great feeling when reading a book and finding that a stray thought you believed too weird to exist anywhere but your own head was in the author's head too. Gogglebox puts it's sights on one less than this, showing us people in their own homes watching TV like they supposedly do every night. It's a daily activity for most of the nation, although unlike a stray thought it's something we quite frequently share, which is why unlike if this show was about people brushing their teeth or taking a shit we don't watch to see if we're doing this whole TV thing right, instead we watch to see these other people simply being themselves, see how they do it differently, and if they do it better than us. Most of these people are funny, because most people are funny. Strangely (especially for Channel 4) we're never set up to laugh at these people, actually we almost always have the same reactions as the other people on screen, which is to say that Channel 4 could have chosen a very different cast and made a much nastier show out of it, one based on feeling superior to the people on screen, while instead there's a jolly atmosphere to everything up to the point where each person becomes a like-able character in what somehow feels like an interlocked cast. Because of this you never end up imagining the camera in your front room, trying to outdo those on screen and putting the spotlight on others to carry on the charade to be best; no, instead you really do "goggle" and like all the best goggling no-one else knows your there.

And in their aim to create a varied show the casting squad have clearly based their choices on age and ethnic stereotypes. No one plays up to the stereotypes, with the editing team giving everyone time to get fleshed out, and the show only further showing the universal connection created by TV and the way we all react to it so similarly. This year's X-Factor was featured heavily on the watch-list, and I was surprised at first at simply how much everyone agreed who should win. Maybe I was just surprised that everyone had such strong opinions of who should win on a show most people usually have strongly negative opinions about, although such communal agreement is a good sign we're not all as broken up as professional worriers would have us believe. Then Sam Bailey hit the screen and the fat jokes came pouring in, the obvious defense being this wasn't a group attack but lots of small individual groups pulling the thread of a joke that was just hanging in front of their faces, although if your going to take the shared enthusiasm for a winner then you'll have to take the shared ridicule of her as well. Thing is, I didn't find this bad, it would have been weirder if this joke wasn't made, by which I'm saying I'd probably make this joke - and you know you would/have - which only makes these people feel even more real, helped by the inclosed aesthetic of the show, which has the cast in their own homes, and the detail we get about them only minimal, and read out by Craig Cash, a member of Britain's favorite family of fictional TV watchers, no less. 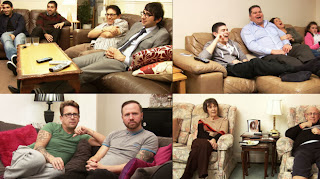 I feel like the cast members are too good (they make show afterall) to not get some space here. And no, I didn't go for that other writerly cliche of watching and pointing at the screen everytime someone turned out to be exactly like someone I know. I didn't spot my friends in these people, only little bits of myself I've been self-conscious enough to notice. There is a nuclear family in here, in which we have the slightly chubby dad who embodies the nice at-home side of Tony Soprano, the more kids-orientated mother who's probably known to the kids as the "strict one", there's the son who's in a stage of trying to act older than he is (a moment that reminded me of a younger me: the son making fun of Australians to try and generate some Frankie Boyle-inspired shock laughs ("they think they're better than everyone else") only to find his family not laughing, his parents clearly worried about the fact that this is going out on TV, and the son having to keep up the performance lest he lose face), and the younger sister who wears pink and loves One Direction and acts all over-excited. They aren't as funny as most of the other cast members (characters? sketches?) but this only holds up a mirror to the viewer who probably wouldn't be, even though you'd like to you would be just as funny as these other people if put on the screen. The family sits with a mid-screen divide separating the men from the women, and the other characters all stem from this society-default family type.

The other families/friends have more quirks than this real life Simpsons, which almost guarantees that nobody will like all of them. The most obvious favorites are the older couple (my dad calls them a pair of "alcys") who own a bed and breakfast and spend most of the time boozed up. They're commentaries are usually funny stuff. Then there's the actual "old couple" of the show (my grandad described the man as "sex mad") who's interactions between each other are pretty funny. There's a gay couple who don't fall into any stereotypes, there's two old guys who's blank seriousness feels completely out of place with the others, there's the two average-joe heterosexual middle-agers, there's the two black brothers and their father. There's loads of them altogether, and I guess the biggest compliment I could give to all of them is they can't be summed up with generalizations.

Looking back I had more fun with the show than any other non-fiction of 2013. If you are going to criticize the back staging of the show, of which some things have to be artificially staged to make the show's creation possible, then your criticizing the whole fly-on-the-wall genre, which means your complaining to a brick wall of a genre that's already survived any criticism. The fun and occasional insights created are worth any small cases of forced reality. I know complainers would rather have Channel 4 pick addresses out of a hat at random and then sneak into the chosen houses at night where they can install hidden cameras into the living rooms and broadcast these people's TV watching activity for our entertainment, and all on a clean conscience knowing they're broadcasting hasn't lowered itself to the cheap artificiality of other channels. Those few won't enjoy Gogglebox, but for me it made for some great TV. 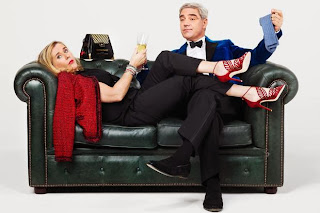