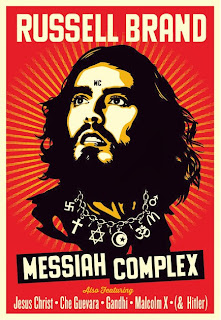 I must start by telling you a quite unsavory theory many Brits share about Americans: they think they're pretty damn stupid. Forget all that stuff about McDonald's whores and Rednecks, that's all ancient history, right now they just think you Americans don't know your shit from your ABCs. Let's face the facts: George Bush really did a number on you guys, because now there wasn't just an idiot in charge but if you fill in the blanks like it seems a lot of Limeys did then you'll see there musta' been a whole lot of people lining the streets to elect this guy who were just as stupid, if not more. I must apologize for such a stereotype which I've been fed for years, and even bought into for quite some time, although this isn't going to be a conversation on world relations so it's not me or even the British public I'm looking at with this stereotype in mind, just Russell Brand. Which is the only explanation any of us Brits have had for why Brand, his comedy at least - the man himself seems to have cleaned himself up nicely - has went so downhill since he went to America. Just look at him during any of his American work and you'll see his whole persona change, his normally over-enthusiastic and campy delivery became slow and over-explanatory, his continuos use of cultural references disappeared and his vulgarity was replaced simply by his sexual persona which he played without even a slight hint of self knowing, all as if he was catering to the cliches of his new audience.


Then again this trip to America, which if time is nice will simply be Brand's "transitional years" are actually only a small distraction in his main comedy-ography. His time in the states was made up of: gaining some notoriety through his hosting of the VMAs, getting clean (both in image and in substances), marrying Katy Perry, making a number of movies that vary in quality, divorcing Katy Perry, and finally, and very bluntly, announcing he wanted his bad boy image back with a swift phone through a window. His comedy work there consisted of: his show BrandX, which even with it's occasional highlights will be lucky to ever be mentioned again, a 2012 dvd release of a 2008 gig that had "cash-in" written all over it, most obvious in that it was from the same tour as his previous dvd release only now performed with his apparent (or possibly imagined on my and a few other people's parts) prejudices with performing to an American crowd, and finally the previously mentioned VMA hosting which was already a punch line for Brand back in his 2008 tour.

So I'm guessing we're all just going to forget about his work in America in the same vein that we've all happily brushed aside the fact he was once a heroin addict, or if to forget sounds too strong then at least rebrand it as "character building" - and following that Messiah Complex picks up where his last show in the UK Scandalous left off. He's back (or from this side of things - he never left) trying to get audience members into bed, and he's back to satirizing his own image, the target here being his recent ventures into politics, with as-always hilarious commentary by Noel Gallagher passed on to us.

The stage of the Hammersmith has four faces implanted on it (or five if you count Brand): Gandhi, Che Guevara, Malcolm X and Jesus. There's really two sides to why these faces are on stage: 1) is the side that's put Brand on the news so much lately, and I'll hand it to the guy he seems genuinely passionate about the need for heroes in society and for us to step away from Capitalism and the false needs we have became so chained to. This part isn't really comedy but more "public speaking" in it's simplest form of Brand trying to get some interesting ideas across to us. At one point he says "I only know all this because someone took the time to tell me" and that's all he wants to do here, and the thing is Brand seems to understand, maybe even heartbreakingly so, that he can't be a Gandhi or a Malcolm X, the circumstances weren't right and for so long neither were his intentions, but he really does care and he does want change, and cross my heart I truly believe Russell Brand the three time shagger of the year and recovering junkie truly means it, and 2) Brand say's he wants to show you how he is a little like these people. This is the tongue-in-cheek comedy side of things. As a fan of Brand's since Ponderland I'll vote for this being Brand's funniest stuff in years, with his greatest stage asset (in abundance here) being his spontaneous delivery which gives the jokes a brilliant on-the-fly feel.

Yet the whole gig raises a question about comedy, and your answer pretty much decides whether you should bother with Messiah Complex or not. It got me thinking: should a comedy show be about serious stuff? Going by my tastes (Messiah Complex was my favorite stand up since Jim Jefferies' Fully Functional in 2012) I'd say I prefer a serious line running through the show, with the jokes coming organically. I'm not saying Jefferies is that similar to Brand, who riled up the crowd like he was gearing up for a political rally, but when Jefferies did his routine on religion and most precisely Christianity's hatred of homosexuals and the Noah's arc story among other things he couldn't have picked an easier (or more over-done) target, but the routine works because it doesn't seem like someone taking apart religion just to get some laughs, it sounds like he genuinely cares about the lapses in logic he's bringing up, he sounds well researched, and most likely even read the bible, and these are the real problems he found with it, which is why the comedy works so well. The other type of stand up, joke joke joke, can obviously be funny, but apart from those few who really can tickle the funny bone as easily as they get out of bed in the morning (let's say Frankie Boyle for a reference point), these gigs usually don't leave you with much and when stripped bare are just people exploiting what they can for some laughs. When Brand compares David Cameron to Che he really does raise a good point about what a pathetic excuse for a leader we've appointed for ourselves, and he seems to understand that a change is needed, and you can feel that, in the same way that later on you can sense his disappointment in how Capitalism has turned the Che symbol into a marketing tool such as in car ads he shows the audience. I'm not trying to patronize with what I'm about to write, in the same way that at the start I wasn't trying to offend, but I think there is more who wouldn't like Messiah Complex than those who would (sadly) but for those who don't mind hearing what Brand has to say and don't mind some sections going by without a joke mentioned then I couldn't recommend Messiah Complex more.
Posted by Bigplatts at 14:32