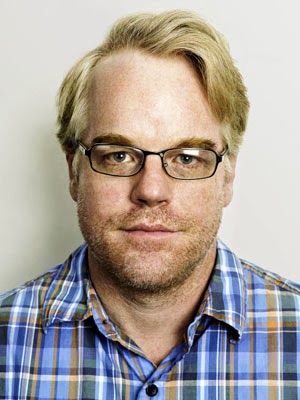 I'm guessing the first time most people took notice of Philip Seymour Hoffman, at least if they were around and old enough at the time, was in Boogie Nights. That movie has such a cosy mentality to, of some guys hanging out making a semi-serious movie about porn. I like to imagine all the actors in Boogie Nights were friends before shooting started and they all went down to John C. Reilly's house and pulled straws to see who would get to play each character, and when Phil Hoffman got Scotty, "the gay one", they all had a good laugh about it and patted him on the back, and P.T.Anderson told him he'd get a bigger part in his next movie, and Hoffman decided to be a good sport and play the role with the fiery liveliness, not to mention heartbreaking reality, that you can go back and see on screen.

Hoffman was a working actor; he lacked a movie star quality but had a particularity to his performances, and a certain like-ability that made you relate to him (the nerdier, more sexually repressed character usually the better) that has lead to a hell of a filmography. He worked with a lot of modern greats: the Coens, Spike Lee, Todd Solondz, Charlie Kaufman, Sidney Lumet, and many more, with each name attached to some great movies, although Hoffman will always be Paul Thomas Anderson's boy (and in The Master - possibly Hoffman's last great performance - his big podgy man) who seemed happy to give him every sort of role available: the hard ass boss in Punch Drunk-Love, the good intentioned dweeb in Magnolia, even the scene-stealing gambler in Hard Eight. His movies didn't make him much of a star, but earned him a big fan following.


Regular readers to this blog will understand my excitement when I found out that someone had put Lester Bangs into a movie. Hoffman plays him in Crowe's Almost Famous, and I believe Hoffman's main abilities as an actor are most clear in smaller supporting roles like this one. Hoffman/Bangs doesn't get much screen time, he's not the main attraction of the movie, but he hangs over the movie, always in the back of your mind even when he's not on screen. Most would have played Bangs up to the cool reputation he's gained (gained, it should be noted, after his death) and others would have played him as a cliche of the Yoda style mentor figure, while Hoffman played him just right, he didn't care if you didn't like him, but he made you like him anyway through a vulnerable confidence that he has in all of his movies. It's a small role, but like all of Hoffman's many small roles he did something big with it.

His list of roles is impressive, including on stage where he built quite a repertoire. More than enough to have him remembered as one of the greats. Looking at his last few movies still waiting to be released, none seem to hold any grand final statement, although leaving behind a film by Anton Corbijn is better than most get, and one can only imagine (in a hopeful sense) his part in the upcoming Hunger Games movies will open him up to a younger fan base who'll eventually get around to his best work.

Hoffman died today aged 46, the authorities having apparently found him dead in his apartment with a needle still in his arm, a sad end that can be linked tragically to reports last year that he had entered rehab for Heroin addiction, not that this makes his death any less of a shock. Hoffman's death is different from that of a young star's death, which creates a big what if? around the star, while we already knew the what of Hoffman, he showed us it in Capote (which bagged him his only oscar win), in the grandiosity of Lancaster Dodd, in the smaller but no less memorable roles like that found in The Talented Mr. Ripley. He gave us such greatness, and now no more.

Then again there's a side of me that doesn't want to morn Hoffman. I felt devastated at the news of his passing, although I haven't allowed it to turn into sadness. I never saw Hoffman in interview, so I can't comment on his personality, or more precisely the side of his personality he felt most comfortable showing to the media, although I do know he was a family man - a girlfriend and three kids - and his death through drugs does seem to cut through any personality people saw in him or any of his career milestones. I have no doubt most will be happy to remember Hoffman unequivocally, although I'll choose to stick him on the list of great artists better remembered only through their work.
Posted by Bigplatts at 21:22