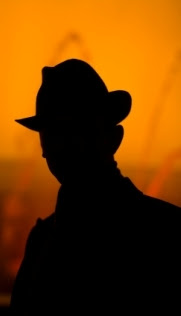 Sit down wee little one and let me tell you a tale. Remember to shut it and keep quiet: because I don't repeat myself. I barged in one night, if it was the right house I don't remember, all that comes back to me is the computer screen: turning it on, looking up those bloggers. Smarv fuckers. I was in a drunken ordeal and may have let go a few less than positive remarks. They get the women, the money, the success. I'm stranded here on this graying rock (Upper England) while they're out there lapping up sandy beaches and turning down sexual advances in fear of pelvic failure. Blackout.

I woke up and I'd started this blog. I had this really cheerful opening post; didn't seem like me at all, and I know I mustn't of been in a creative mood because I stole the name Culture Vulture off of an Orson CD (and months later when I got pissed at my low view count I changed it so it ripped off a Nirvana song). So now I'm trapped; like some average Joe sucked into a sitcom world were I have to haphazardly pretend I'm some expert blogger. Along the way I'll probably shed through a dozen romances, walk into unwitting adventures and find myself on the receiving end of some surprisingly well written death threats.

While I'm waiting for all that to happen I'll probably just keep updating on all the films and music I'm stuffing into my brain and try and write meaningful articles that will probably cause the majority of newspapers and magazines to go bust. Cos y'know, it's a competitive market and all.

With lots and lots of smoochy love and a cherry on top,
Charlie