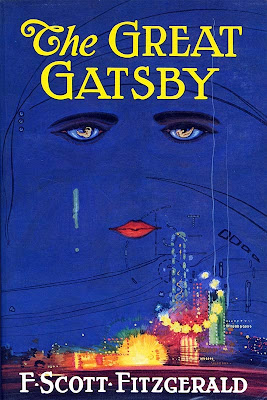 I planned on uploading an ungraded essay I did on Lord of the Flies for school until I read it and realized what a soulless document it was; the information ripped straight from the book with no interpretation and the prose as blank as a Wikipedia page. I've realized that I associate school so much with boredom and lack of creativity that any voice my writing might have slips out the backdoor when I enter a classroom.

My "summer reading" from school of which I was given both Gatsby and The Kite Runner which I'm still yet to read was a little different. I had already bought Gatsby, figuring it would be more logical to read before watching the new film; so as far as I know I've tricked the system and read Gatsby out of the enjoyment of reading a well known classic and not out of graded obligation.

Not that it mattered; my first thought on the way out was how the hell did this ever become a classic? The "introduction" at the beginning of my copy which your not supposed to read until after finishing the book did try and justify the book's classic status. It's a good record of the Jazz Age, apparently, although between the main character's house and the main point of action right next door I didn't really feel like I got a good tour of the decade of parties and excess. The book's only real Jazz Age memento is the character of Gatsby himself. The book was also released as the technology of the world was changing; written in the young Gatsby's diary is a slot made-up for "studying electricity". I was reminded of The Social Network and David Fincher's subtle showing of a world transforming from analog to digital; although Scott Fitzgerald's changing never becomes more than a background distraction. The most obvious of reasons for the book's success, which wasn't immediate by the way, is just the writing and story; it's look at the American dream and the love story at it's center. Not that either add up to much in the end.

Although I did notice something reading Gatsby that none of the other classic books I've read, namely Blood Meridian or counter-culture works like Fear and Loathing, made me think of. I noticed how romanticized these classics become; the image of Gatsby in American culture, of excess and mystery, yet also of inner tragedy and failed love, is a much better image than that of the lifeless and easily explained man you find in the book. There's no meat on the bones of any of these characters, which itself is a plot-point at times; telling of these characters sucked into the material world, seeing someone's worth only in money and stock market value, yet for all of the main characters, the one's who apparently had good (which should mean personality right?) in them, I kept wondering when Fitzgerald would pull me in closer and show me who these characters were. No such reveal ever comes. The blankness of the characters and the world they inhabit seem so white a canvas it's no mystery people decided to add the paint themselves; Jay Gatsby is no real mystery, although the fact Fitzgerald never tells us much about him has made it easier for decades of writers and fans to romanticize the character into a myth that lives more in talk of the book than in any of Fitzgerald's actual descriptions. As goes with the rest of the book too.

For those who have managed to dodge at the very least the outline of the Gatsby story thus far: Nick buys a house at long island, next door to some sort of party-animal who has people stumbling out of his house every night, he attends to find out no-one at these parties knows a damn thing about this Jay Gatsby guy who owns the house, until he meets the man himself to find out Gatsby once loved Nick's cousin Daisy, who is unfortunately now married to smart suited 20s gent Tom, and from there all sorts of heart-warming shenanigans ensue. Tom is the books villain, and the most interesting of all these characters, if only because he is the only one who is fully explained to us. He's a real mustache twirler of a villain; we find him cheating on daisy from the start, and his very presence seems to evoke dread from the other characters. If your like me and your mind implants actors over your imagining of the book (Unimaginative, I know) then you won't have to look far to find some stock-character bad guys to fill in Tom's place; I pictured Billy Zane from Titanic, probably because both characters have no explained reason to do bad, they, both of which from a similar time period and story, are simply villainous because these stories need a villain. Although the book's biggest crime against character is that it never made me car who Nick, the main character, is. Fitzgerald never goes past a quick job description, although luckily Nick, like all other characters, is here to represent only one single dimension, in the same way we have Tom the villain and Daisy our love interest, Nick is our narrator, and it's telling that his complete lack of intervention in the story or any inner conflict still doesn't manage to insight any curiosity into his character. Maybe that's why Gatsby has found such mystique where the other characters haven't; he's the only character who isn't an easily identifiable archetype, instead Gatsby's the sun in the middle of the galaxy, all the other characters revolving around him, the only problem is there's really nothing to Gatsby but his want for Daisy. It feels like there should be a great weight on his shoulders yet he's as light in depth as all of the other characters.

There are themes and big ideas at play here; Gatsby's mysterious past and his fortune which he uses to almost buy the image of a wholesome man, from the outlook surrounded by friends every-night and the striking image of wealth excluding from his suits, yet inside he is damaged, wanting only to rekindle an earlier love. The words American Dream could easily be stamped all over this; because what do people love more in art than showing such a dream gone wrong? Yet Fitzgerald never lets his story settle; Gatsby's story is no rise and fall, instead the exaggerated stories of Gatsby from the people who attend his parties are the closest thing we get to Gatsby being an example of this American Dream fulfilled. Upon meeting Gatsby we are given little time to take in the enigma of his character before his vulnerabilities are chucked in our faces. This is not a big book; 115 pages run by quick, which was of course delight to me so I could move quickly on to books my school wasn't making me read, although this story did feel like it needed to be longer; Fitzgerald neither lets us live in this American dream long enough to be in awe, or takes us into any of the characters headspace's to show us it all fall apart. The paper-thin material and short length leave The Great Gatsby feeling like a slightly extended short story. 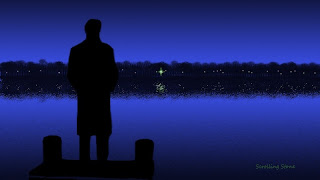 In the end I didn't much enjoy Gatsby, as you can most likely tell already, but the simplistic story was serviceable and the symbolism, which if it is to be believed was stuffed into every nook and cranny of 1920s America is so blatantly obvious it's easy to feel like you've been let into the deeper happenings of Gatsby's world. I'll finish on subject of the green light, one of the book's most well known happenings; in which Gatsby looks out over the peer at night and sees a green light in the distance. A beautiful sight, but out of reach (I did tell ya this symbolism was obvious) representing his love for Daisy which even though is now in clear sight has by that point come to be a piece of total fantasy for Gatsby. It's in Roger Ebert's review of Citizen Kane where Ebert writes about said green light. His point is meant to encompass his love of Kane yet it just as easily shows the flaws I found in Gatsby:


"Rosebud is the emblem of the security, hope and innocence of childhood, which a man can spend his life seeking to regain. It is the green light at the end of Gatsby's pier; the leopard atop Kilimanjaro, seeking nobody knows what; the bone tossed into the air in “2001.” It is that yearning after transience that adults learn to suppress. “Maybe Rosebud was something he couldn't get, or something he lost,” says Thompson, the reporter assigned to the puzzle of Kane's dying word. “Anyway, it wouldn't have explained anything.” True, it explains nothing, but it is remarkably satisfactory as a demonstration that nothing can be explained"

Ebert draws a connection between Rosebud and the green light like they are one in the same, just to two different characters. But as the reporter in Kane explains: Rosebud was just another asset of Kane, finding it wouldn't have explained anything to these reporters. Yet if Gatsby was to reach the green light his character would be complete; he would be no enigma or mystery, he would simply be the American dream the people around him think he is. To me the green light symbolized what a fickle character Gatsby is, and in turn the book itself. 6/10
Posted by Bigplatts at 19:01

Email ThisBlogThis!Share to TwitterShare to FacebookShare to Pinterest
Labels: books