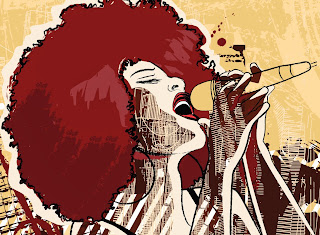 I sang as a child, maybe not a lot or not a lot for what the average child sings, but I did sing. I don't sing anymore because that scares me, to sing in public would only be forgotten by everyone there in a matter of minutes but the embarrassment would stick in my head for a long time, years maybe, or at probable worst all my life. But as a kid you don't give a fuck, not because your confident, which you appear, or because you think your good, which if you do or don't slips my mind, but because you have no way of knowing the social consequences. For the best people those don't exist anyway, but for the rest of us we don't sing in public. I can't handle any audience, not even myself. I tried to sing alone not too long ago, nothing operatic, some Nirvana, after all most people can't even tell what the lyrics of Teen Spirit are. But I sucked, I hated it and it made me swear to myself, without anything internal or external actually being said, to never sing again.

I only remember singing once as a child, in first school, two years before year one or "first grade" in what my school tagged "nursery". I sang ABBA (What else?) and don't remember the reaction whatsoever. I was instructed specifically at the start to not sing ABBA but I didn't know anything else. The song? Dancing Queen. Or Super Trooper. Maybe Mamma Mia. Lets hope to fuck it wasn't Gimme Gimme Gimme (A Man After Midnight) but I wouldn't guess against it. The singing voice, which was summoned without thinking and with no ambition for professionalism must have been somewhat horrible, but I bet you your fucking house my enthusiasm came through. The sort only a real fan could summon. I couldn't do that with any band today, not Nirvana or Eminem or Outkast but I did it then for ABBA who had been programmed into my brain like an electronic chip.

And I bet you I didn't go up and down with the music, not in the same tones that the real singers did. I would have known the way they sang each syllable off by heart, at least if a four year old's brain can pick that stuff up, but I would have just tried to get the words out. All in my accent in my un self-aware four year old's voice. And it's easier to relate to singing that is someone singing what comes from them, singing it the way it comes out, than singing it the way they think it should be sang. In "Lucille" by Little Richard the man sings the line "I'll be good to you baby, please don't leave me alone" three times. On the first and third he says it too fast, it sounds like a mistake. You can tell what he's saying but it sounds like it's come out wrong while he tries to remember the words. But the second time it comes out perfectly; all the words are separate entities. The difference is noticeable, and it makes you hear him put emphasis on some words, it puts your attention on how he says things, not what he's saying. And Little Richard always got this, you can hear him trying to do this and that, like a craftsman fiddling away at work before your eyes and not like a piece of pre-created product that's already been worked out.

The Elvis version of Tutti Fruitti" doesn't work because he sings it too fast. In "Hound Dog" he adds a crackle to the singing but in Fruitti he's just imitating the black music that inspired him. The Little Richard (y'know, cos he rocks) version stretches it out just this bit longer. You can imagine little richie's body shaking along, but Elvis would have to go into spasm just to keep up with his version.

Singing comes straight from our bodies, unlike a guitar or keyboard which needs an instrument and an exclusive school of talent and training, but we can all sing, and we can all sing masterful lyrics, but none of us who aren't pros can whip out a guitar and fire out a ballad, not even a simple one. Singing is the most human part of music, the one we all feel like we can do ourself. In the movies the tragic hero who dreams of being in a rock band but can't cut it sits and uses a hair brush in place of a microphone and pretends to sing while David Bowie comes through the speakers. The nerdy kid in the teen comedy evokes the laughs because he's air guitaring. You can't hear personality, who a person really is beyond their immediate talent, from a miracle of a high note, but you can hear Little Richard, who he really is even if we never meet him and know him as a person, in those three verses.

When Mick Jagger first appeared in the early 60s it was like a floodgate opening, moving as far away as we could from opera singers and the low-baritone vocals of 50s rock'n'roll. Jagger's voice started out like an imitation of these singers - just listen to their first single "Come On" - but soon his accent really came through. It lurched left and right, more than older singers would have ever allowed, or would have been allowed to, but Jagger put a personality into the singing, which made sense when he and Keith Richard started writing songs; the lines were much longer yet the singing slower. Lou Reed, who inspired this post, perfected conversational singing. In "Sweet Jane" the lines don't even rhyme but they go with the music. By then it was hardly even singing, the lyrics simply fit the bill in the form they came out.

But Reed didn't sing all the Velvet Underground songs, and any band would be lucky to have a voice as unique as Mo Tucker's sitting at the back. "After Hours" and "I'm Sticking with You" are more for Tucker's voice than anything else. It's a gimmick for sure, but people do gimmicky shit with instruments and recording equipment all the time, the voice is no different. Surely The Kingsmen's "Louie Louie" could be called genius, sang in complete garble, almost drunk sounding. It's the full acceptance of the voice as another tool. When "Smells Like Teen Spirit" released a few decades later the comparison was easy, but my favorite thing about most Nirvana songs is trying to work out the lyrics. For years I thought the line "And I swear I don't have a gun" was "I swear I don't have a god" to me it wasn't depressingly ironic, just punk rebellious. When Kurt Cobain sang a line it didn't rhyme because the words ended the same but because the general sound coming out of his mouth was pretty similar to the last. The lyrics themselves didn't matter in the moment; you got the emotion from his voice.

Yet now so few singers see voice as the same musical opportunity that Little Richard did, or the same wavering conversational piece that Lou Reed did; they don't use it as flexibly as Freddie Mercury did or use it with such power, personal power, as Michael Jackson did (or at least 80s Jacko did). Actually when was the last time you heard a rock musician really use their voice, and put it in the center alongside the guitars or drums or piano or whatever. Chris Martin stays in one tone, Arcade Fire all blurs together, and I don't even know if Alex Turner can get angry. Most other genres don't make much difference; rap and hip-hop has started sounding samey and is there any point bringing up mainstream pop?

Which isn't to say these guys are bad; Alex Turner has went from a typical Liverpool accent (used to create a conversational style on their debut album) to a smoother, more romanticized voice. Most of these singers seem more than serviceable, to the point they project across a stadium perfectly, something that Jagger always struggled to do. And there's some that seem to actually alter their singing voices: Kanye West is the best example. Which should be expected from such a studio-focused artist. He used auto-tune to purposefully emotionless effect on 808s and Heartbreak and in this years "Blood On The Leaves" he let the grand emotion in his voice entangle with the technology. Eminem doing his sarcastic singing, doing the full white trash, at the beginning of "So Far" is a good example of someone using their voice, someone who said himself he couldn't sing no less.

This wasn't about auto-tune. Mainly because this wasn't about note-perfect singing. Singing usually isn't the thing that draws people into music, it's not what makes people want to be rockstars. That's the guitar sounds and the lyrics you go over and over in your head. Mick Jagger's stage persona becomes an attachment of the singing, and that sure looks cool doesn't it? No, singing, the kind which was the mainstream only a few decades ago, wasn't about beautiful sound, it was about people who hadn't aimed to be singers being singers and bringing themselves into it. The singing would tell you more about the artist than the words did.
Posted by Bigplatts at 16:06