I'd never read anything by Tao Lin so in preparation for reading his newest book, Taipei, I read many of his online pieces - all serving as a good entry point for Lin if you're in need of one. Among them: a short story told in the style of an instruction manual on giving a book reading on mushrooms; a self profile which works as a straight faced parody of an article on Jonathan Franzen; a personal essay on "living online"; and a recalling, in cold detail by detail style, of "trespassing" an NY bookstore. I had mixed feelings on these pieces, but I'll agree that they all serve the point that Lin is a "voice of his generation", although before you fill with rage, understand that such a title has nothing to do with quality.

He earns the title only because these pieces are all short, self-knowingly quirky, and have a sense of gimmicky spontaneity that links them with your average vine or shared internet story. Very "of the times". They're all obnoxious too. And come from someone who hails from 4chan and Thought Catalog, which work towards telling us that Lin is "one of us" and that his work doesn't just stand against the more accessible artists right now but comes from a place more or less below them - an apparent requirement for a voice of a generation.

If your looking for the style of these shorter pieces in novel form then - I'm told - Lin's earlier novels are where it's at. On the other hand Taipei is a straightforward narrative, no gimmickry involved. The story, although this is never hinted at in the book, is mostly based on Lin's life. It's unclear how much is exaggerated - obviously some is - but it doesn't take much time on the internet, on Lin's Wikipedia page even, to see that lead character Paul is Lin in disguise. Things are kicked off when Paul is dumped by long-ish term girlfriend Michelle, and in quick succession starts a relationship with another girl, Erin.

Taipei isn't complex: its half a romance, a journal/travelogue capturing a new relationship over a sort-of long period of time (long for a twenty-something lets-just-see-where-this-goes relationship) and half a drug story. It's not really about addiction, although that certainly exists between the cracks of this story, but the constant drug consumption here makes it more about drugs than anything else. The drugs here are treated as a perfectly normal facet of life, as if to be traveling with a group of recently-met young people of similar age and not all have your pockets brimming with pills would be weird.

The story might be straightforward but it has little structure. It's a long pondering, underpinned only by Paul's book readings and tours, and his yearly trips to his parents in the title city, where his mother - who he appears more connected to than anyone else - worries about his drug use and wants him to stay to gather writerly experiences in the vein of Ernest Hemingway - the sort of mother who probably only read Hemingway to get closer to her son's profession.

Paul doesn't know what to do with such love though, he exists in a different, newer world back in New York; where the cast of almost all twenty-somethings say they stay in a lot but all seem to wind up at a lot of the same parties, and for who the act of actually "doing something" - whether the party or trip or whatever it was was good or not - is good in itself. Where the whole point of an experience is to have it, making it now a memory, and a future story, and a facebook update. Paul exists in this sort of void - Taipei being a sort of cynical exploration of the New York youth culture explored in Girls and Frances Ha - and Lin uses Paul's story, told as unbiasedly event-to-event as possible, to jump off into tangent thoughts and explore the void.

You could call Taipei a satire: Lin's prose style can be read as purely sarcastic. He puts speech marks around common phrases, as if to say a phrase we all say is to buy into some sort of universal copyright. He puts brackets next to the names of characters alerting you of their age, just like a magazine article or newspaper. And the prose themselves come across like a 4chan Hemingway: a no-bullshit directness, further coloured by an Easton-Ellis style fetishization of brand names and consumer tags. It becomes painfully tiring after a while, with the only breathers from this style being Lin's pondering thoughts, all of them interesting, and all of them making it seem worth it to brave such a cold, calculated narrative. But that's the whole point really: that the writing here is meant to represent, and criticize, a human way of thinking by making it seem much more mundane and lifeless than most usual writing. I couldn't possibly say it makes for good reading, but it's commendable that Lin keeps up this style for the whole story.

The thought of Lin's that's stuck with me the most is about childhood - a theme returned to again and again in Taipei - and the idea that education, school and then college/university provide a structure for one's life, a forward momentum like that of moving up levels in a video game, that can be traced back to our births, and which is lost in adulthood in which our lives become a formless mass; the successes and failures given less frame of reference. It's a beautiful thought really, the sort of philosophical pondering that David Foster Wallace would rumble up, and not what you'd expect from an Easton-Ellis acolyte. That's because when he's not hiding behind a wall of smart self-degradation, Lin does have a more human side. Taipei is for the new lovers: a solipsistic rom-com. It's romantic in the way that Lou Reed's Perfect Day is romantic: because it sounds lovely but we all know it's really about taking heroin, which I guess isn't that romantic at all, but that's why it is, you see: because secretly we all just want to love the things that we believe no-one else loves, and we want to admire those parts of ourselves too, and not our good parts. Which is why this book - soon to become a classic document of "relatable" angst and having not found oneself, has nothing remotely relatable in it. 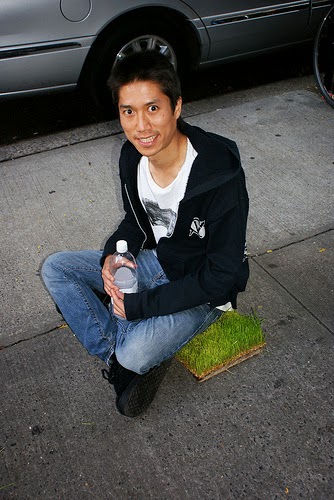