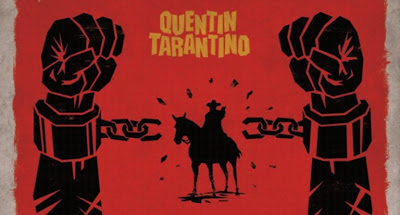 The thing that excited me most from the clusterfuck of pre-release hype that surrounded Tarantino's "Southern" (apart from a new film by Quentin Tarantino of course!) was a comparison made by one journalist between Francis Ford-Coppella's mess of a production Apocalypse Now and the 300 days Tarantino and his star-heavy Django crew spent in the corn fields of the south, battling off on-set disasters and drop-outs from some it's biggest stars. There is of course different types of good movies; plain old well made one's (Tarantino's usual bread and butter), and messy ones; the sort of films that go a bit overboard, that just manage to skim the mediocre barrel and end up a lot better because of it; the category Django Unchained most easily falls into.

These messy films will always be damned to a lot more hate than the usual classics; but where would the medium of film be without them? Not that Tarantino ever set out to make such a film as this; the original script, which was leaked before the film even graced our screens, was a very different affair. The problem here isn't what could have been, it's that the changes are glaringly obvious. There's an interlude towards the end that interrupts the whole flow of the film. Not that it ruins it, but a film this big and ambitious (you've got to find an extra three hours for this baby) starts to feel even messier than it already is when the writer-director starts to make last minute re-writes and combine characters together.

Tarantino might be an eccentric when it comes to personality, but the man's always had a great level of restraint. His apparent blood fetish hasn't actually materialized for real in any of his films until this one; where his previous exercises in cutting the camera away from the violence and focusing more on the build up than the climax are nowhere to be found, here he can't get enough of the red stuff. Not exactly a bad thing in the majority of places, it's not like the western is the genre of subtlety, but at times the cowboys getting blasted away just become faceless goons, only there to be killed, and of course any action scenes where the people fighting are pointless means the action scene itself is pointless. Nevertheless Tarantino adds enough flare to proceedings that you rarely care; even if you might sometimes wish he lived up to that apparent Sergeo Leone influence a bit more.

But it's that expression of "Tarantino does it well enough that it doesn't matter..." that I'm getting at. Nobody cares about that abrupt tonal shift near the end of Apocalypse because when you get there all of the jungle's beauty surrounds you and brings you to a larger-than-life Marlon Brando; an offer you just can't refuse. It's the same here. I didn't mind that Tarantino turns the movie; a serious one (even if it does continually flirt with twisted humor) into a pure exploitation flick at the end, because hell, this is one good exploitation flick. I didn't mind that the ordering of some events felt out of place (or some just felt rushed in) because the positives of my experience far outweighed the negatives. Even many of the side characters, which would have each gotten their own spot in the sun in any of Tarantino's previous features, are given nothing to do but stand around and look menacing (looking at you Goggins) but the core characters are all so well written and developed that I didn't much care. Surely that is the very definition of a "flawed masterpiece".

But where the hell are my manors? I should probably have explained the premise by now. Oh yeah that's where I left them, in the fucking rental store where you can watch this, or atleast bite the bullet and watch the damn trailer. It's a tale of this guy called Django trying to find his dearly beloved; Broomhilda (Kerry Washington), who haunts Django (a never-better Jamie Foxx) throughout the film, but is little more than the damsel in the distress once she is found. Although once again not really a problem, people wanting a real romance have (very obviously from the outset) came to the wrong place. It's the story of Django and the German dentist-tunred-bountyhunter Dr. Schultz (Christoph Waltz) who frees him. There are of course detours throughout their adventure, but the story is simple really, rescuing Django's wife from plantation owner Calvin Candie (Leonardo DiCaprio; finally embracing a darker side that seems to trump his tortured-hero persona) by going to his slave plantation of slave plantations: Candieland.

So firstly what's good; Tarantino's dialogue starts in a bit of a funk (sounding stilted and self-aware) but quickly gets better and better, building up to the film's centerpiece; all of the key players around a friendly diner table that slowly falls into oblivion. The dialogue here is just as smooth and quotable as anything else the man's ever written. The whole film just looks good too; Tarantino continues to baffle some with his choice of Robert Richardson as cinematographer, who's pristine shine doesn't seem to fit with Tarantino's grundgy 70s tendencies, yet I think it fits. Tarantino's always been great at framing shots and showing off a knowledge of the craft, he's thankfully never took that to boring extremes (ala Paul Thomas Anderson) and usually seems more focused on the writing and story anyway. Here his directional skills, here meaning his framing and staging, feel a little more on the fly, but they're still solid enough to keep a nerdy film fan like me impressed; and it's that attention to detail that makes Richardson the right person to capture these gruesome tales on celluloid. On top of that you have a great action film, with another very memorable soundtrack (I was straight on the internet finding out what that ending track was) and lots of the cute Tarantino-isms that fans will be expecting (just look for all the character names and ironic references)


And what about the bad? I did bill this as a "flawed" masterpiece didn't I? Well there are some problems. The film would have probably felt a lot less rough around the edges if all the things Tarantino had planned to put in actually saw the light of day. No, I'm not making a criticism based on a comparison with the script, it's simply that the things the movie misses out illuminates the finished films biggest flaws. A big action set piece, the one with all of the faceless bad guys, leads into the plot detour that makes you feel like Tarantino is just back-tracking, just stalling for time until his big finale. Not to mention that both Kerry Washington and Walton Goggins originally had more to chew on than the simplistic archetypes they have here. Sacha Baron-Cohen was originally cast as a deranged slaver who sets Broomhilda's story in motion. And her character and the film itself would have probably played itself out more naturally if this, as well as some other disappearances, had been included. Then again, on second viewing my brain had just accepted the film for what it ends up being. It becomes less about being better or worse than the movie Tarantino originally planned and more that it's just different; definitely more comical than what was originally planned, but no less watchable.

And with all the hype that's went into them then I suppose I should mention the cast. Foxx is as cool and controlled as Leone's Man With No Name, just with the act of being a freed slave adding a bit of an extra dynamic (and some nice clothes too). Samuel L Jackson playing Candie's house slave Stephen also gives us one of the films best performances. It's the first performance I can remember Jackson doing in years that doesn't have him playing himself; I had forgot how nice it was to be reminded every few years that this guy could act. As I mentioned before many actors here are underused, and you can add another one of Tarantino's career-revivals in the form of Don Johnson to that list. Not bad, just no standout.
The real attraction here though is just seeing DiCaprio being an massive prick. It's ten years since Catch Me If You Can, a film where he showed he had a sort of old-fashioned movie star charm. It was why he and Tom Hanks were such a top pairing in that movie. Unfortunately since then the man has dropped any aspirations of Carey Grant he likely never had, and started gunning for the role of being the next DeNiro. The results haven't been abysmal, just very shout-y and not much else. In Inception he had the charisma of a wooden plank. Not at all the cheeky grin of doing wrong he had in Catch Me If You Can; in that film he was a sort-of family friendly Alex from A Clockwork Orange, and it's only ten years on working with Tarantino that he's managed to follow on from that. It's his first non-lead in a while, and he doesn't even appear until nearly half way through. But his performance, while not the deepest (Jackson's character has a lot of complexities if you slow down and think about it), or even the smoothest (Waltz earned his oscar), he is brilliantly wicked, and made even more so by DiCaprio's penchant for playing the hero.

So where does that leave Django standing in Tarantino's filmography? I'd actually vouch for it being one of his best. It doesn't have the immaculate plotting of Inglorious Basterds, but Tarantino did spend roughly 10 years writing his self proclaimed "masterpiece", and while that film did feel like it was made by a super-human who could see all situations from all angles, it also left the film feeling a bit stilted. In Basterds everything played out because that was how it's writer-director had pre-determined it through endless re-writes and long-planned-out changes. Django in comparison feels like a breath of fresh air; a piece of pure spontaneity. Tarantino clearly didn't see from all angles this time, but it doesn't matter because this is an enjoyable journey, filled with dark humor, interesting characters and hilariously over the top gun battles.  9/10
Posted by Bigplatts at 22:36