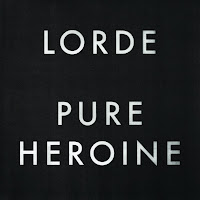 So Lorde (pronounced Lord, depressing like Maude, and not as pompously fun as Lordy like I originally thought) is 17 next month, same age as me. It's still weird to get celebrities the same age as me. I can only pass off envy for child actors like Joel Courtney and Asa Butterfield, which is silly in the sense that not even my dream job would be acting; I imagine myself doing their interviews and adding some sense of controversy or humor to their monotone, and sitting on movie sets, sunglasses on, lapping up more praise than I deserve. As for the women; well it's easy to throw carnal desire at Dakota Fanning and Chloe Moretz, although I found myself more envious of Lorde, probably because she's the least manufactured: writes all her own songs and has made an album, Pure Heroin, where everything sounds drenched under the same murky sheet of sound.

Or maybe it's because she comes off asexual, one Youtube comment summed her up with "she makes my dick confused" I wouldn't agree, but in terms of sex Lorde neither eliminates possibilities or leads you on. She's good looking but not at all seductive, and her age could mean anything from taboo to complete inexperience. Her dress sense gives us no leads and her album cover is simply nothingness. The title, creating a clean-cut hero woman image, is more interesting as a cheeky wink to the drug and the image of rock'n'roll lifestyle it conjures up, yet despite some interesting musings on modern culture's celebrity obsession the album never fulfills this promise. She could quite easily slip into a world of chart sheets and grey office blocks, and that's what she does on the lesser moments of Pure Heroine, although the album stays afloat on moments of personality seeping through the cracks and a production that seems fully aware the star has not yet decided an image for herself.

The monotone of Lorde's voice fits well for album opener 'tennis court', first line being "Don't you think it's boring how people talk?" which becomes this albums mission statement. She is in no way the outcast, but this line sets up an album of youth-focused social commentary as she places herself above the other people of her (my?) generation, at least to the point of being able to give out generalized criticisms. The lyrics never sound self-loving yet Lorde feels invisible in the scenarios she creates. It's a straight-up criticism of the mainstream, and not just music but people in general; the popular kids at school and the fame-seekers. It's the same pose hipsters and people apparently too cool for their own time period have been taking for years. Later on she sings "I'm kinda over getting told to put my hands up in the air". If it didn't feel like such a bored sentiment it might actually spark excitement at the thought of a recent no.1 hit slating the mainstream, but this seems like a teenager acting smart rather than having anything smart to say on youth and popularity discrimination.

The production is a highlight; it stays out of the limelight for most of the album, and the tricks that are implored are simple and not exactly hard to decode, similar to the lyrics. The best track on the album 'Teams' starts off slow, Lorde coming to sing the line "the call I send" over and over while the production distorts her voice more each time. The message is clear: modern music has become stagnant and boring, and this distorting leads into the most addictive beat on the album. The rest of the music here is a mixed bag of addictive enthusiasm ("Royals", the recent no.1) and misplaced boredom ("ribs" which makes it's point with it's quiet lyrics and droning beat, but never gives you much of a reason to listen).

But for the most part Pure Heroine is very enjoyable, only starting to loose juice in it's last few tracks. Her biography page on Spotify describes her style as "confessional bedroom pop" a fitting description that I would never have thought of; the sound she creates, despite not offering a great flexibility, is Lorde's most unique asset. Lana Del Rey comparisons seem easy enough, but Rey's music, especially her backing tracks which border on melodramatic, create a much bigger scope than Lorde's; it's a communal angst, while Lorde's music really is from the bedroom, it's not a claustrophobic sound but it does trap you, the sound here is narrow, the variety limited and the sounds that were aloud in all conforming to the little image Lorde has created for herself thus far, so from the second you enter Pure Heroine the sound is focused and unlike Del Rey who oversteps her personal aspirations with big productions Lorde never over-does it.

Yet that sound-scape will have to be expanded in the future, that's the only really direction for the music here to go, which will be the actual test of Lorde's talents; this is just a debut after all. The most concrete talent here is the lyrics. I don't have a favorite type of lyrics, wrapped in metaphor is just as good as storytelling, but there is something about lyrics that just simple state something; current emotions and actions, that has to be admired. Lorde sings "Pretty soon I'll be getting on my first plane" and the line really is that simple, not that there isn't more going on in the words of this album, but lines like that add to the mood, and to our image of the singer, bit by bit building up throughout the album.

So is that what I'm envious of? That someone my age is making good music, and it's successful too. Kinda. Although I couldn't help but think Lorde isn't the first person of this age to reach this point of success, yet made it through an entire album without saying anything about other stars of the past, or of the effect of music on her life. While listening to Pure Heroine I could never remove the artist from the music, her age and current level of success helping to colour the lyrics and the ultimate meaning; yet for an album where the real world made itself so visible there was no hint of post-modernism to be found. Throughout I kept getting the image of Johnny Rotten in his mainstream hating "I hate Pink Floyd" top, only not in some grungy 70s night-club but in a frat-boy house party in 2013, and it says he hates one of today's pompous giants like Coldplay or Frank Ocean, only he doesn't really hate them, he just wants you to think he does, the same way Lorde isn't bored of throwing her hands in the air, she loves it really, and her album's best when she's accepting that. A fun album, but an annoying contradiction, both in it's message and it's music. Although it seems like a good tease of what's to come. 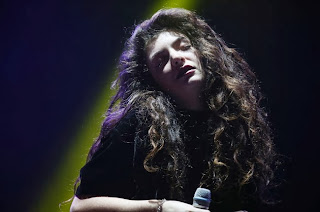