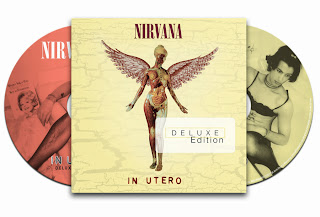 The greatest moment for me listening to In Utero again in it's 20th anniversary form didn't even have anything to do with the new and remastered music, but was the moment of realization that 20 years was the amount of time it's took to stop In Utero from being a Kurt Cobain suicide note, a Nirvana sign-off or just a deeply depressing disk seen only through the veil of a shotgun-fueled tragedy that occurred months after the albums release. In Utero, both because of the 20 on it's box and the extra material, which leads into alternate cuts, outtakes and live performances, has finally become just another Nirvana album; a piece of the furniture. Most discs wouldn't survive being taken out of their place of importance or innovation or cultural relevance, but In Utero does because it has the thing that made Nirvana so great, and it has it in spades: that unassuming quality, the delivery of great rock music with no fake importance, painful levels of emotion without the need for an excessive production.

Yet the biggest praise normally leveled to Utero is that it sidestepped the major commercial success of their previous album Nevermind and actually reversed Nirvana back somewhat, away from the mainstream and into a much more raw, darker place that would make more sense alongside the obscure Seattle grundge rockers that Nirvana's success had left behind. Yet this is partly untrue; Nirvana did deliver an album almost purposely aimed away from the mainstream, but they in no way managed to escape the shadow of their success; everything from this albums first line ("teenage angst has paid off well, now I'm bored and old" - which here returns back to it's original sarcastic quip, and not the dark self-contradiction it could be seen as) to it's mainstream-crushing song titles (Radio Friendly Unit Shifter is the antithesis of a mainstream seller) all meant as a response to the band's success, which this whole album is; a darker, more personal, less clean response to an album that was squeaky and shiny and ironically the furthest Nirvana ever went from their signature sound.

And as an album on it's own, forgetting the personal and commercial implications, In Utero has always been a masterpiece, dark and personal for sure, but in musical terms a fast and angry punk-rock release; no remastering required. Which is why it's thankful the remaster has no resemblance to the lifeless remastering of Nevermind from two years back. Not that your stepping into a completely re-organized land of clarity, but this disc updates the original disc without stripping any of the personality out, and on top of that there's a "2013 mix" of each track, produced by original composer Steve Albini, that adds some slight differences to each song. The word slight should be kept in mind; the 2013 mixes don't have any jarring changes, not at all jarring enough to change anyone's opinions of these tracks, and probably un-noticeable completely to the un-Nirvana-trained ear.

Better than that is the entire "MTV: Live and Loud" performance from 1993. I caught most of it on Youtube around a year ago, and listening here without the stage persona, the impressively lively one that Nirvana had, to look at, does weaken things a little; but it's made up for with the great sound quality and some recordings which apparently never aired on TV. I'll stand by my assertion that the live versions of "Radio Friendly Unit Shifter" and "Scentless Apprentice" are better than the album versions; the lyrics are actually understandable and Cobain's gargled singing (and screaming) become less threatening. The highlight of Live and Loud though is a cover of David Bowie's "The Man Who Sold the World", there's already the acoustic version from Unplugged in New York, that has over time become more popular than the Bowie original, which is still the more impressive version, but the version presented here is a faster rock n roll version; and to compare the two is to see the two very different opposing sides of Nirvana. 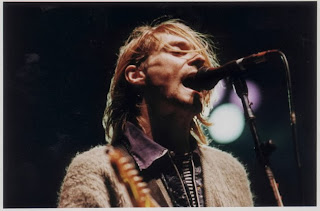 And now for the real draw; the unreleased material. It was with these that I started to see In Utero in a different light. These recordings take In Utero out of the weird underworld it has always been heard, that spectral world from the Heart Shaped Box video filled with broken hymens and biblical illusions, and takes us straight into the studio it was recorded in. Which was itself a fiery two weeks of recording; probably filled with recording sessions as claustrophobic as many of the tracks found here. The highlight for me was "Gallons of Rubbing Alcohol Flow Through the Strip" a track originally promised on my CD copy of In Utero as a "Europe only track" that my copy still never played. At 7:35 it comes in as the longest track in the Nirvana cataloge; the first half takes you into Cobain's parental fears, in all his screeching lyrical glory, but in the end it's hard to truly believe this track is any more than a part-sarcastic wink at his own personal troubles, confirmed by the second half of the track which is a rambling jam session, including Cobain confirming there's "one more solo" and heavy guitar feedback. And it's strange to hear this messy Nirvana for the first time; because for all the talk of slackers and greasy hair Nirvana wear always well-practiced and the unceremonious length of all their other tracks is testament to unacknowledged professionalism. It's a sad song really, taking you so close to the band members, and to someone the world left back in 1994, but it didn't stop me from listening again and again.

The rest of the recordings are no long lost treasure chest but they further illuminate some of the more messy sides of Nirvana; "Marigold" sees Dave Grohl preparing for Foo Fighters with what I imagine is his first recorded vocal performance. A live Foo Fighters version recorded around 15 years later is available, and like everything Nirvana-Foo it's the tidy, well executed and mostly emotionless ying to Nirvana's darker, more haunting yang. Not to pick sides, or even write about something that's pointless and needing of much more space than it would get here, especially when Grohl's enthusiastic rock is a joy Nirvana never gave out, but I've always prefered the older band; and the emotion poured into the final In Utero, along with willingness to go further out into places no-one knew they were even think about in these back-stage recordings, is my quickest way to explain why, and it's all their in "marigold" for you to see.

"I Hate Myself and Want To Die" pulls no punches; no explanation, no sarcasm, it's actually all nonsense to the point that it's title line is never even mentioned. It fits the muddled sound of the album, punctuated by a catchy hook, and was probably dropped more for it's name than any tonal flaws. It originally shared the name of the album before Krist Novelistic persuaded Cobain they were only headed for a lawsuit with that one. Strangely absent from the set list is "Verse Chorus Verse", youtube available, that was also an early album title, and adds to the themes of artistic boredom and personal anguish, but for some reason was not felt worthy of mention here. And yeah, there's other stuff too, there's an instrumental track and a even some demo's, one's called "Jam" although I still can't - even after two or three listens - remember anything about it. You'll gloss over most of it; even a lot of the good stuff, because surely the 2013 mixes are pointless and the live show deserves a separate listening sesh, no: this collection is an excuse to return to a great album, itself expanded by some extra tracks.

And this one's always been my favorite Nirvana disc. Nirvana's discography has always made me stop and stare; the three discs they released, the same two year gaps between each, and the emotional turmoil and changing living arrangements of everybody involved during these three releases all comes across as a perfect beginning, middle and end story. An amateurish garage record that received little success, a mammoth pop record that shot into superstardum, and this, a darkly personal record that went further into both blues and metal, and even had time for their acoustic ready-side ("All Apologies" just makes sense as the final Nirvana track on their final album) and even without the same commercial success has became the band's most loved album.

And the album itself: it's a fun record. The lyrics are simpler and less straddled with the great weight they're thought to have, but they do have meaning, however obscure, and represent Cobain's greatest moment as writer; from the scope of disturbed imagery created ("Meat-eating orchids forgive no one just yet/Cut myself on angel hair and baby's breath") or the softer moments savored for things more thoughtful  ("Give me a Leonard Cohen afterworld/So I can sigh eternally"). It's up to you entirely if you want to add some meaning to a song as blunt as "Rape Me", lots of fans do, some see it as a song about isolation, while other's see it's similar cords to Teen Spirit as a joke on artistic rape by the mainstream; it's far fetched but believable, although meaning or not it's still an obvious call for controversy, smartly done at least.

The actual sound of the album is very aggressive; the opening guitar riffs on "Very Ape" literally rip through the air molecules as you burst into the song which feels like an explosion of inner turmoil, all done in less than two minutes. It's not exactly punk; it's more structured and thoughtful than anything Nirvana had done previous, and songs like "Dumb", while not exactly slowing things down, do provide a more identifiable image of the emotions flying around. Each track tries to do something completely different from all the others yet when you get to the end it feels like a well rounded experience. Yet it's really the flaws that make this album. Some might find that strange, but have you ever listened to an album and simply went with every song there? Good maybe, but boring, and not much of a challenge for the ears. "Tourette's" is heavier than Metallica, and a lot more scary, and I've already mentioned the gargled lyrics and violent screaming on some tracks just come on too strong, but all these tracks really feel like they're going for something, pushing against each other with jagged edges; you wouldn't be expected to like it all. In the end it's just good music, simple as.

And that's really all there is to say. Go listen and enjoy. In Utero has always been tagged as the Nirvana album people who don't like Nirvana like, and the extras are only a support act to that. And it's an even better thought that people would discover the band, or at least the album, in this form. 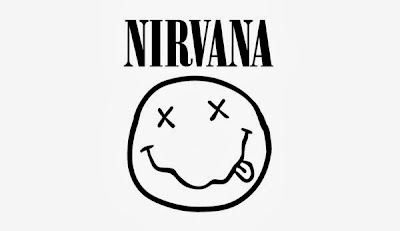 (I'm going to stop giving a rating in my reviews from now on, it's always felt pointless giving them out so I'd rather just let the review speak for itself)
Posted by Bigplatts at 15:57