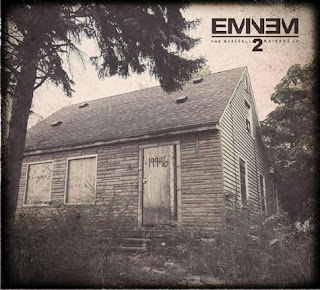 Out of all of the things my mind drifts to when left alone, what major force will rule art after post-modernism seems to be coming up a lot lately, and such a change must be due soon, right? The official term is apparently quasi-modernism, a response to the self-questioning nature of the current world in which art will move away from irony and individuality and go back to a more sure state. Eminem, who's success was born during the millenium angst era (blatant post-modernism's creative and commercial peak) used his stance as the biggest rapper (the most self-referential of all genres) of the time, or maybe even biggest artist of the time, to mock his own fame (and the famous around him) and confuse his image with the contradictions of Marshall Mathers, Slim Shady and Eminem. Yet Marshall Mathers LP2 is more like post-post-modernism; even it's name a spiral into the many nostalgic references that appear on the album.

Post-modernism came to major prominence, at least in the arts, during the 60s. The films of the french new-wave aimed to show the banal constructions of the movies Hollywood was churning out, and the James Bond franchise accepted the lunacy of the movies and just ran with it. Modernist films didn't work anymore; they didn't wink at their own absurdity - or bypass it completely - like these new movies did. It's harder to pinpoint music's evolution into a post-modern state; although the 60s too moved people away completely from the craftsmanship of classical compositions and let them see the real people striving to create their own personal masterpieces. This culture has of course exploded since then; the bubble burst in 2000 and since then no-one can even be influenced because everyone's influenced by everyone, and opinion's don't matter because everyone opinion imaginable has been posted online. Eminem, in response to his post-modern born success has spent the last few years almost regressing away from it, accepting his own position as king in the land of music, and making albums that look inside and aim for a more commercial, technically impressive sound. Yet his last two albums came off boring, a once hilariously punk artist "maturing" in all the wrong ways; yet looking back they don't seem stagnant from Eminem's lack of creativity but because he had too much: too many options, too many things that could be said, and too many ways people could react.

LP2 shoots off in so many directions that it has no image, although that doesn't mean it's directionless; it almost goes so far as to make fun of any art that has an image, of any art that doesn't self-comment on it's own self-commenting nature. LP2 has all sides of Eminem: the scary murderous Eminem last seen on the first LP ("My life will be so much better if you just dropped dead") self-hating Eminem ("Came to the world at a time when it was in need of a villain/An asshole, that role I think I succeed in fulfilling") pop Eminem (solidified by "Survival" created for the new Call of Duty, which works better without the 3 minute product placement of a video) and even the more ambitious, technical Eminem of recent times (the hyper-speed rapping of "Rap God" will be admirable to people not even well-versed in the genre). Eminem mixes in everything he can from his 10+ year reign, right from his references to Bill Clinton to his throwbacks to ex-wife Kim right to his claims that this is album is "the end of a saga" as if by putting all those thoughts in his head, those endless thoughts everyone one of the internet age and the gossip culture is forever flooded by, into one album, that maybe he can move past it and grow up. It creates an urgency to this album, more so than any other Eminem album, as if it's very creation is important to it's creator.

"Goofy" Eminem also shows up; if the other tracks all position Eminem as the center of the universe then these tracks take him back to a white trash american hip-hop kid on the streets, only a little faster paced and more confident. The best track to come of this is "So Far", also the best track on the album, where Eminem describes, among many other things, not being able to go into a restroom in McDonald's without being bothered because of his celebrity. Em switches from playing stupid with a groovy backing track (proving Eminem can write a hilarious track without the need for shock value) to vintage celebrity-hating anger with a guitar backing track.

Yet this offshoot of different styles would simply come off schizophrenic if the production didn't back it up. The disc is produced by Dr. Dre and Rick Rubin and the production creates a claustrophobic feeling, giving little space from song to song; no chance to breath or question where the album is going. The backing tracks don't stray too far from what was found on Em's tracks 10 years ago, although the sampling used is a mixed bag; "Berzerk" uses samples from Billy Squier's "The Stroke" and two from the Beastie Boys' first album. These work in the sense they add to the rap; the song was clearly written around them and would feel incomplete without them, yet in "Rhyme Or Reason" when the song is scored to The Zombies' "Time of the Season" it feels forced and Eminem almost manages to get lost in the mix at times. Although that shouldn't take away from what is for the most part a fantastic production; lots of great tricks but few of them ever intruding on the track. The indulgences: a fake news report that opens "Brainless", a sampling of "The Real Slim Shady" in "So Far" etc feel organic to Em's own mission to create his own murderous image; the opposite of the weird production effects of Kanye West's Yeezus, which's production seemed to dictate as much of the album as the music did (and to great results, I should mention).

The guest list doesn't appear as eccentric as you might expect. Kendrick Lamar, appearing on "Love Game" another highlight, is the best of the bunch, working against his normal pop attitude. Yet there is something noticeable about the way Eminem uses, and has always used, his female guests. Unlike the male guests, like Lamar, who organically come in and out of the track alongside Em as if it is as much their track as his, the female guests are sectioned off from Em's rap, as if as much a usable tool for the benefit of the track as much as the samples of songs over 20 years old. Skylar Grey appears on "Asshole" but is wooden, and a feels purposefully wooden; she adds to the track but has little place of her own in it. Em's best female duet was with Rihanna in "Love the Way You Lie" where both brought their different styles into the track. He re-teams with Rihanna here on "The Monster", a simple, catchy pop tune, aided by Rihanna who does little but play her part as instructed: repeating the chorus as required. Em still hasn't figured out, or maybe just plucked up the courage, to share control of a track with a woman. Yet it's Eminem himself who puts in the best performance here; his best in years. In the past few years I've likened him to Tiger Woods in which the golf champ played himself into boredom; no longer even registering as an interesting player. Since his comeback Eminem has seemed like that too; although there's a sense of fun to the raps here; as if there's something to prove again. There's a show-off style to the rapping, as if it's finally acceptable to be openly good at things again. The sarcastic digs and smart quips throughout the album should go up there with the man's best.

In the end it's impossible to get to the end of LP2 without questioning what you've learnt about Eminem on the way; and I don't mean the alter-ego's he conjures up: I mean the real Eminem. The closest comparison to Eminem's stories in which he wants us to see him as a fame-hating murderer is the life-as-performance-art of Kanye West. Yet West has kept it all up; I don't know if West is really an asshole but he's given me no other alternative but to believe it. Yet we've all seen the good in Eminem; ambitious but not quite arrogant, and very probably fame-hating but in a funny way and not as spiteful as in the songs. We know about Eminem's family and his retirement from music, and through all of the years the story Em told in "Kim" his most disturbing story, became only fantasy, yet it was made as fact. LP2 is the first time Eminem has accepted it all as fantasy, and what we get is someone playing with their own image and having a lot of fun with it. If you do need to single this disc down to one single Eminem it's "messy" Eminem, who here has made what is undoubtedly Em's most like-able disc yet. 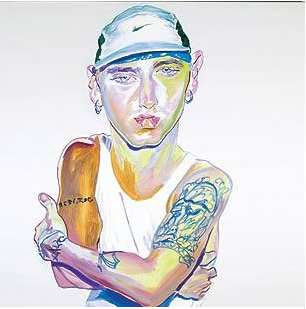