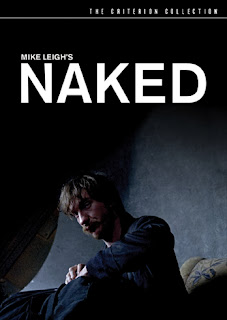 In the first scene of Mike Leigh's Naked we see Johnny (David Thewlis) raping a girl before quickly driving to London (from Manchester) to avoid the consequences. He goes to the apartment of an ex-girlfriend (and her two wildly different roommates) and after conjuring up eccentric reactions from them leaves and spends most of the film walking around the London streets, interacting (and annoying) the locals, and finding himself in worse and worse predicaments; not that he ever seems to care all that much.

It's a wordy movie, made up mostly of dialogue from a wide variety of characters who don't stick around long and don't seem to affect much in terms of plot. Yet plot isn't what Naked is about, and neither is it about what makes Johnny tick; as Johnny says at one point "You've had the universe explained to you, and you're bored with it, so now you want cheap thrills and like plenty of them" before walking us through a disposable world where he remains utterly disgusted with everything he see's, and happy to tell everyone about it. It captures a time and place that doesn't seem far away but doesn't exist anymore; that old Britain, not yet commercialized into looking like the rest of the world; it's lots of old fashioned wall papers and yuppy offices. Each person lives in their own little box; the apartment in the film has three people living there but doesn't look lived in at all; it looks temporary, as if all the people living their decided the second they got there that this isn't where they want to stay; Naked is a collection of lives - a lonely night guard, a shy waitress, an easy-going junkie type - that don't feel like they're being lived yet, like they're waiting for a jump start, yet Johnny seems to be the only one who understands that-that jump start isn't coming.

London is painted as an apocalyptic wasteland, each act of unsettling human nature completely ignored by the other happening just a few feet away. All the outdoor scenes look very cold, as if it's the city that's naked; stripped of it's own soul and reduced to accepting the wasteland it's become. Millenium angst looms large, as if the countdown to 1999 has let people live without the same cares as they normally would; this is the setting of The Clash's London Calling, only it's not the government that's pressing down on everyone, the government is invisible here, it's the people themselves; a city eating itself from the inside out. Yet we keep watching Johnny, not because his bleak view lets him see what the people around him don't see, but because even though he's just as lost as everyone around him he seems to care; it would be easy to say he's given up but the torment Johnny looks trapped in stems from a disappointed with the world, and it's only a select few who have the bravery to be disappointed. He has tattered clothes and a messy excess of facial hair and through it all he looks like Jesus, and he wanders around like some sort of messiah; he doesn't give out any answers but looks like he knows them all.

The energy Johnny inspires stems simply from a sense of purpose; he's that magical layabout figure that somehow doesn't seem lost. Johnny's only real possession is his rucksack which as far as we see contains only a small collection of books, Johnny coming across very well read, and sitting there at night watching the movie it made me want to go to the book shelf and start reading right then. Because Johnny's the type of book worm everybody wants to be; not the greying professor but the man who looks like he's been into as many strange worlds as he's read. At one point he finds himself in a woman's house, checking out the book shelf; he tells her about Homer's Odyssey which she owns but hasn't read; it's hard to imagine this man sitting down and reading The Odyssey, instead he comes across as a character who was born already knowing it.

In the best shot of the film Johnny is attacked by a group of youths; they emerge from a dark alley and are masked in silhouette, as if it's the city itself that has swallowed him whole and spat him out a beaten wreck. It's a cruel joke by the filmmakers that we get to know all the characters Johnny meets and annoys, yet it's a nameless group, completely clueless to who Johnny is, that attack him. This sequence always reminds me of a news story from around 10 years ago when Thom Yorke, of Radiohead, was beaten up outside a pub in London. Both men, the real and the fictional, are symbols of angst against the modern world, and these incidents both have these men being beaten up by their own angst; the same world they look down on coming forward and reminding them that they haven't changed it at all and probably never will. That incident can be clearly heard in the sound of Radiohead's album "Hail to the Thief" a peak of paranoia and going off the front cover: capitalist angst. That music would go well with Naked, although even better is the film's melancholic score, which manages to follow Leigh's wonderfully realistic emotional pallet beat-for-beat.

Yet by the end of the film we're at the exact place we started off, more or less, but it feels like we've progressed. Johnny gains nothing from his visit to his ex other than the knowledge of what she's doing now; no relationship after the end credits is pointed to. Yet there's a relationship there that wasn't there when the film started, even if it's gone as soon as the ending; like we are Johnny thinking of this trip to London as some fleeting memory from years before. He starts to have sex with a woman at the top of an apartment building before slapping her around and insulting her; yet when Johnny leaves her we can only imagine her life as being what we saw from the window outside: nothing more. Johnny spends some time talking with a night guard, asking him lots of unanswerable questions and eventually ridiculing him about the dead-end nature of his life. The two walk around an office building at night, all the lights on, and if you've ever been to a public office block at night you'll know that feeling of not being with anyone yet somehow not being able to feel alone. The next day when the two meet again in a cafe the man has very little to say to Johnny, other than telling Johnny, simple and straight up "don't waste your life". The first time I watched Naked was a hypnotizing experience, although I didn't enjoy it all that much; Johnny only seemed to ruin lives. He wanted to pull everyone else down to his level, but watching it again I see Johnny isn't trying to ruin any lives because he thinks they've all already been ruined. He does manage to jump start someone's life though, even if we never find out to what extent, which may not be enough to make him a good person but does give him some purpose to go by. He is a Jesus figure in some ways, wanting people to change their lives for the better, only the world he's trying to change no-longer reacts to the promise of a better life or eternal happiness, the only person they do react to is someone who represents themselves at their lowest point.
Posted by Bigplatts at 20:42