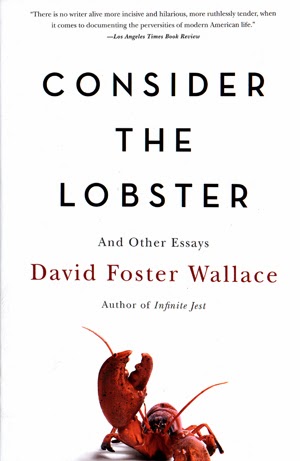 It's hard to write a post trying to sum up a man who from what I can tell wanted to be everything. The contradictions are everywhere: it was Wallace himself who, during interviews, linked his generally accepted masterpiece Infinite Jest to the weight of the impending millennium, yet in a piece written not long after writing this "great American novel" he asked his readers to imagine what it would be like to be one of the best in the world at something, and with the same modesty and self-guessing he summoned through all his career he wrote "I have tried to imagine; it's hard". He was a self confessed SNOOT (or an academic-level member of the "grammar police" as you or I'd label it) yet supplanted his hip image with slang language and iconoclast views. He frequently documented his social awkwardness and anxieties yet willfully put himself forward for many of the crowd-speaking activities that the socially awkward readers who related to him would be so scared to do, like teaching lit courses in college. He cut through the bullshit and gave it straight (gaining what has became a huge following) and was a beacon of a very 90s type of anti-capitalism, yet he seemed very interested in adding to his own myth, in the end leaving behind an unfinished third novel for publication after the demons of his depression eventually caused him to take his own life in 2008. Wallace is a paradox in theory although makes perfect sense on the page; his desire to be the the show-off, the boy wonder, the cool kid, the joker, the relatable nerd and the mythical genius - in many cases all at once - is what makes him reflect the 21st century in a way that few other modern writers do.

Not that I know of everything that Wallace tried his hand at being, just what's in the second-released of three collections of his essay work: Consider The Lobster. There's no general theme connecting Wallace's journalism/essay work which is why Lobster has such a plethora: a report on the 1998 porn awards; the little reported reactions to 9/11 from Wallace's home in the South; a look into the morales of eating Lobster through the lens of the 2003 Maine Lobster Festival; the transcript of a college lecture he did on the easy-to-miss humour in Kafka's work and many many others. The pieces differ so much I'd be greatly surprised if anyone was avidly interested in reading all of them for the subject matter alone, when instead, even for the pieces that might interest you, it's Wallace who you read for. While reading Lobster I kept thinking of a quote, by someone important enough to be quoted on the back of a book, on the back of a Lester Bangs collection I own that called the 70s rock critic "one of life's greatest gurus" which I guess would seem strange to someone who had never read anything by the man, known almost entirely for record reviews and Lou Reed interviews. Although if you read Bangs you'll know exactly what the quote means: he used rock journalism, which I guess doesn't give writers much room to spread their legs, to talk about everything he could, from religion to feminism to sexual desire. He commented on a whole culture while riffing on Blondie. I don't know exactly what Wallace thought of Bangs, although he (Wallace) considered Bangs enough of an influence to dedicate his little read, co-written book Signifying Rappers to him. Wallace's writing is just as far reaching: he's another great life guru. During the essay Authority and American Usage Wallace reviews  Bryan A. Garner's A Dictionary of Modern American Usage, although the "review" is just a book-end for Wallace to talk about language use in general. He praises Garner's book, and Garner's prose in particular for their lack of personality, allowing the reader to take his uses of grammar and phrasing on face value, unconnected to Garner's ethnicity, gender or age, yet the irony here is obvious as Wallace can't even write a simple book review without injecting himself all over the page: he talks about being a kid and learning the songs his mum (an English teacher - explaining a few things) would come up with to make her son remember correct grammar. Then talks about the prosecution he and every other grammar-loving kid would get when showing off this knowledge in the classroom. It's these little injections of personality, and of Wallace's highly opinionated self that comes through on almost every page, that made reading a review of a book I have no interest in so readable.

A frequent comparison Wallace got was to Thomas Pynchon, an obvious comparison in their similar post-modern fictions, but also similar in their prose in which both turned the kaleidoscope of a million inter-connecting thoughts going through their heads into beautiful fluency. They both crafted sentences with a simplicity to them, a gentle flow of language that most writers - dealing with half the weight of ideas these guys had - could only dream of. Yet there is another paradox to be found here: mainly that for the simple pleasure that Wallace's prose are, his writing is certainly intimidating. Not just the length either, his writing is a sea of brackets and italics and parenthesis adding explanations that seem put there by an obsessive need to explain everything. An average one of his paragraphs will have a few footnotes (oh how Davey loved his footnotes) and once in a while a footnote will be so long it spills over into the next page and fills the page after, itself with it's own cordoned off section of footnotes. It's obviously impressive stuff, actually there's such an air of intellectualism to some of Wallace's pieces that it feels like an actual triumph (hence a sort of obligation) finishing them. This style is what makes Wallace so unique, although it sometimes (if only rarely) doesn't work, as in Host, the final essay in Lobster and the only I couldn't bring myself to finish. Wallace's usual bottom of the page footnotes are here replaced by boxes which are fitted around the text, an unintentional visual metaphor for how lost you get within an article about talk show host John Ziegler, where any sense of a message Wallace is trying to get across gets lost in the mess of information. These endless box notes feel like Wallace showing off, but not in his usual modest parade of excellence, which - although it undeniably throws some off - is simply something I think most like to read, if only because so much of what is "great writing" usually gets its reputation from supposedly smart people who explain why it's great, while Wallace's intellectualism quite literally smacks you in the face with the knowledge of it's own greatness, while in Host Wallace tips overboard with his endless explanations and descriptions; that kaleidoscope of ideas never getting smoothed out like it does in his better pieces.

Much has been made of Wallace's arguing style, the weighty description of the subject matter and the frequent diversions covering the surface so you no longer notice an argument is even being made (and just as much has been made of the apparently bad influence this has had on the many bloggers who take to doing bad Wallace imitations). A good example of his essay technique can be found in Up, Simba where Wallace followed John McCain's 2000 presidential campaign. Like usual he opens by telling us how unqualified he is for the job (in the same way he opens so many footnotes with (paraphrasing here) "although you're probably not interested I'm going to explain anyway" or "the editor will probably take this out anyway") and starts by giving us the story of how he got the job in the first place. It's Rolling Stone who hired him for the campaign and he turns up in the Bangs-style leather he thought all people working for RS were supposed to wear. Wallace knew full well he was no political journalist so instead he fills up what is one of the longest essays in Lobster with more information about how a presidential campaign actually works - the backstage rooms, the tour buses, the atmosphere between parties, the chatter between the techies etc - and shies away from going full-detail into the nitty-gritty of the politics. Wallace does report on some of these politics, though, and having written it all just as it happened means the article, which doesn't section off exactly when one time zone in the story has became another, reads like a live journal from a press event. In the end though it's not the end message or even the sudden bursts of personality but Wallace's clear mission to paint for the reader the full picture of whatever he's reporting on. In Big Red Son, about the porn awards, Wallace doesn't pass judgement on the stars or the producers - or even the millions watching at home - yet neither does he have a major argument to get across (although his musings on the modern state of porn and it's place in society/place right next to Hollywood are insightful and sometimes hilarious, like usual) but instead he simply describes, in details most writers don't bother to go into, the porn awards, including the way the award shows work, the people he met there and even the recent history of the awards. It seems like Wallace's mission, more than anything, at least in his non-fiction work, was to give readers the whole picture of something; the truth behind it. There is undoubtedly much more detailed analysis of John McCain's presidential campaign, and the man's politics in general, than you'll find in Up, Simba, yet I know I wouldn't be interested in reading them. Although Up, Simba is interesting, and seeing the inner workings of the campaign and the reactions of those actually close to it make it much more than an essay on John McCain or the 2000 presidential campaign, instead they make it relevant to politics in general, even for those, maybe even especially for those, not interested in politics in the first place.

I loved reading Consider The Lobster, and would recommend it to anyone whether the list of essays particularly interests them or not, although it's hard to separate the subjects being dealt with from the man himself, which is why I'm still not sure if this post was about the book or about Wallace himself and all that is to be found of him in Lobster. Some will say this is Wallace's flaw, that he wanted to be known as a great writer so he made his writing so that he would be. Which is true, although that's just adding to the Wallace myth, isn't it? When he was really just a normal guy, an impressive writer sure, and someone you need to read, but so frequently linked to his generation as a voice or figurehead, when he was actually just like everyone else of his generation, he just never quite wanted to be.