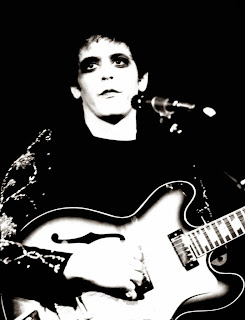 Lou Reed made rock'n'roll dirty. One could quite easily list the things The Velvet Underground have went on to influence: everything from punk to grundge to glam rock to goth stylings, but Reed should, although he won't be, be best remembered for taking rock music out of the sun and putting it into basements and drug dens. Him and his leather jacket and lyrics about doing heroin and John Cale by his side making the guitars go crazy. It's actually refreshing to listen to the four Velvet albums and hear music clearly at the birth of something special, as all music from this time was, but completely untouched by Beatles or Stones or Hendrix or Townsend. Actually, not before, or in the 40-so years since has anyone walked through such a twisted world (the Warhol-New York-art scene of the late 60s to be exact) with so little pretense. It's a cliche to say these tortured stars live these lifestyles so we don't have to, so we can just watch from a distance, but I think that's a lie: we all want this lifestyle, deep down, even if we know full well it's just a dream, but if we got there we would only know what to do because guys like Reed have already done it. And Reed, by going head first into the dirty romanticized the lifestyle more than anyone before or since.

But the music did eventually become clean. 'Loaded' the last Velvet Underground album does away with guitar feedback and 17 minute punk-rock orgies and celebrates rock'n'roll. The producers told them they wanted an album "loaded with hits" and they used that to get the albums title. And you'd think the way they got the title and the fact they were descending down from art-rock experimentation and collaborations with Nico that they'd treat 'Loaded' as a joke. That they'd make an album recorded in sarcasm or at least try to find their own way around things. But on 'Rock & Roll' they dance and rock and entertain as much as the Stones ever did; the song isn't a tribute to rock it's an all out celebration of it. At the end as Reed screams "Baby it's alright" over and over he gets caught up in it, like rock'n'roll was all around him, drowning him in excess. That's why The Velvet Underground are possibly the best rock band of all time: certainly not prolifically or even in cultural weight, but in their willingness to play along with whatever was in front of them. They weren't self referential, or self mocking, but further than that their music didn't mock anyone else either. The Velvet Underground gazed over all music and accepted it all, it reveled in it. No matter how weird or out of the ordinary. The scope that the Underground's music covered seems tiny, yet it seems to point to all other music, and contradictory to what most big bands would do, it tips its hat to it.

This pointed to the success the Underground never had, or at least didn't have until a critical re-evaluation years down the line, but instead Reed buckled and went to London. He returned to The Velvet Underground for a short reunion in the 90s, although this heralded no new music and only furthers the Underground into grandiose "what if?" territory. Instead from 1972 to his death he created a helluva lot of solo albums; some great ('Transformer' the generally excepted classic and best starting place), some not so good ('Metal Machine Music' one that's at least worth looking up) some quickly forgotten ('Magic and Loss' anyone?) and some worthy of at least a pat on the back for the simple miracle of their creation (recent album 'Lulu' which he co-created with Metallica). In some ways Reed's career mimicked that of his good pal David Bowie. Both walked into as many musical styles and movements as they saw fit, never seeming full satisfied with one easily identifiable image. Yet this testing out of different styles didn't come from a place of uncertainty but simply from a lack of having anything to prove. Reed stood on the cultural sidelines, never expected to give his own answer to what the mainstream was doing (a trap that Bowie fell into), which left Reed to create a career that shot out in as many directions as the man could manage; putting out everything: the good, the bad, the weird, and watching to see what would happen. Whatever you make of such a career it was a good one; Reed's lyrics, evolving from his early tales of drug abuse and sexual desire and further into more poetic personal tales, should be remembered as some of the best lyrical work ever; both for the unique style and the influence Reed had as the first writer to tackle such taboo subjects in song. A great artist, who delved into both sadness ('Stephanie Says') avant-garde ('The Gift') and rock'n'roll fun ('Walk On The Wild Side') and everything in-between.

Reed was already some years into his solo career when he did a famous (at least to journo-wannabes) interview with Lester Bangs, a partially transgressional figure and the best rock journo you'll be likely to find. It was in 1975 and is hilarious, but also depressing, mostly because it paints Reed as some overgrown man-baby, looked after in the same way Justin Beiber is probably cuddled into submission by his henchman, and surrounded by the transvestites and outcasts he spent his early career singing about. It's not the introverted and unbeknowingly ambitious Reed of the Velvet Underground, or what little you can find of him at that time, or the gentle Reed of the last decade who seemed calm and happy in the knowledge he had done it all and didn't need to dream; probably the best, or only good form of old age.

But I bring up the interview because it's so unclean in image for an artist who has in the last few years been rebranded as a humble old master, and who will now due to his death be swallowed by a tidal wave of unquestioned hyperbole. Kids will hear about Reed in years to come and get to know his legacy through his grand achievements and innovations and as one who everyone, at least right now in 2013, seems to love. Which I guess his music does rightfully deserve, although I can't see the man, at least in his prime, ever having accepted this title with open arms.

Reed still won't gain any major mainstream acceptance other than a quick spike in interest, but to those interested he will most likely be placed among the great rockstar figures of the 60s and 70s, possibly ranked up next to the likes of McCartney or Clapton, or more fittingly Jagger; the two come from blues-inspired rock bands and are both trademarks of the "cool" rockstar. But Jagger, even in his rebellious status, is like a firework explosion of all rock'n'roll - not good or bad - and all the things that rockstars can strive to achieve; all the way from his police mugshot to his knighthood. Like the Stones themselves Jagger has spent decades changing himself, morphing himself into what is needed to make a man of his age or cultural position the biggest he can be. But on the other hand not even a pleasant older version of Reed has cleaned away the dirty image of that kid playing to only a small selection of fans at Max's Kansas City, at the height of the Velvet Underground's success, chatting calmly to the audience, asking them if they want one long set or two shorter sets, and moving when ready into a selection of the grundgy or avant-garde songs that made up the Underground's back catalogue. When he asks the audience "have you all got school tomorrow?" he seems like a guy trying to be cool, yet ends up showing the vulnerability expected from anyone in front of a crowd. Not like Jagger, who worked to create the rockstar-myth: an unattainable sex god figure, unquestioned as the darker side of celebrity. His stage presence a sight to behold, but only furthering his separation from the audience. Yet Reed, in his vulnerability and his trying was a real rockstar. He was the ordinary guy, maybe even a fan, fulfilling the rockstar dream, the sex and drugs and rock'n'roll lifestyle. Only he reached it and must have been pretty bored, bored with how far the hippy's had taken it, and decided to take everything much further. That's why out of all the great Lou Reed's people are wanting to remember the one that should be remembered is the one sitting in some hotel room shooting the shit with Lester Bangs, putting shitty records on and talking with weird creatures that Bangs couldn't read as either men or women, and telling Lester Bangs his writing had went downhill and acting like a baby when the people employed to look after him told him it's time to go to bed. That's the Loud Reed we should all remember, because in it's ugliness and complete removal from reality and one sided nature it is what rock'n'roll is and what it will always be. 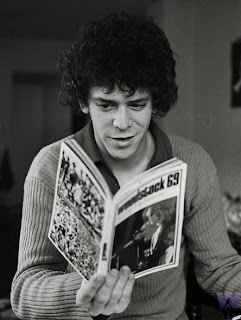