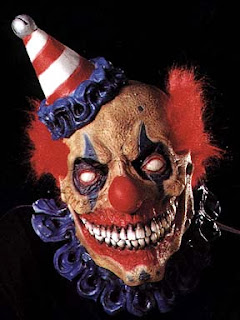 As a child I never did go trick or treating, probably caused by one of the major problems with having no siblings: living your childhood the way your parents are living their adulthood, at least if you've got parents that don't know any better. So for me Halloween never meant scary; more fantastical. Witches and goblins and evil spells and anything the TV would feed me that I would think of as scary. Which is why I don't like much modern horror: all the torture porn and the paranormal activity trying to make everything too real. I prefer Stephen King's style of things: colorful and scary in it's slight removal from reality, as if his stories take place in a parallel universe where everything's been moved just a little to the left.

Which isn't to say I never got scared. I was scared of the dark and later on developed a fear of heights, only to find out that the majority of people from my generation have this fear as well. In the end you just brush past it like it was nothing. And I was scared of movies too: The Mummy was the first one, the 90s version with Brendan Frasier which looking back is actually a pretty solid action movie. Then there was They, a little know horror movie produced by Wes Craven that kept me up all night; although my dad told me later that it was a rubbish movie anyway. Identity too, with John Cusack, also pretty crap; at least in retrospective. And finally there was Jeepers Creepers 2. It's one of my favorite so-bad-it's-good movies now, alongside The Wicker Man, but at the time it scared me so much I picked up my bed covers and lied down in my parents bedroom, only to be quickly shouted out of the room.

Yet the most damaging movie to me was Monsters Inc. I love Sean Lock's routine, that's a British comedian by the way, where he talks about how disturbing Finding Nemo is; his mother and all of his brothers and sisters are murder within the first few minutes of the movie and the film basically involves Nemo being kidnapped from his father and smuggled away across the world. In the end Lock contemplates just showing his kids Scarface instead. And it's always had me thinking about how disturbing so many kids movies are, especially the ones from Pixar, which when translated into the real world seem to be about some disturbingly adult themes. And Monsters Inc really did have a damaging effect: during one of my many days out with my grandparents as a child they took me to see the movie, which I loved by the way, then proceeded to take me home as normal. That night I couldn't sleep with fear my parents would run away and I kept creeping to the edge of the stairs to peer down and make sure they were still there. This bedroom-confined horror doesn't translate completely to Pixar's movie but it certainly triggered something in my brain because for the next few months (child's memory - this could have went on for well over a year) I would panic horrifically until my parents themselves went to bed; sometimes even shouting down to ask them to talk more just as a conformation to me they were still here.

Strangely though I was always considered the tough one at school. Partly thrown on me because I was the tallest and would slowly develop the deepest voice of anybody while in my early teens. And plus I would tell of all the horror movies I'd seen and how I hadn't been scared, and would buy F.EA.R 2 like most of my friends and be the only one not scared. But these apparently scary things: some were the fantastical fluff that I connected with commercialised scaring, and the ones that tried to be real were always hyper-real. How could I be scared of Saw, even if it was a real man behind the mask and all of the killings were done by machinery and traps not magical powers, when I associated so many more disturbing things with real life. In films these would be referred to as "adult themes" and includes addictions and abuse. On the dvd of A Clockwork Orange, during one of the special features where everyone involved gets their ass kissed, one speaker (a critic maybe? or possibly another important filmmaker) explains why people found the movie so disturbing (disturbing enough to cause copycat crimes and get banned in the UK) and his reason was that people were no longer scared of monsters and ghosts - and we're talking all the way back in the early 70s now - they were scared by real world problems that could come knocking on the door; just like the gang in A Clockwork Orange who go around during the night, going into homes killing and raping.

During the 70s this invasion of people's real lives was made into some great horror movies. Why all the creeping around and comical murder weapons, why not something as loud and aggressive as a chainsaw? Texas Chainsaw Massacre. What about sex? The thing that rattles more nerves than blood. The Exorcist. So you think your safe in suburbia; your a teen who doesn't need to deal with ghouls and goblins, schools a bigger worry. Halloween. All of these would be swamped by sequels and would all return back to the fantasy; becoming so structured that Scream would come along years later with the mission to evoke more laughs from making fun of the genre than create genuine scares. 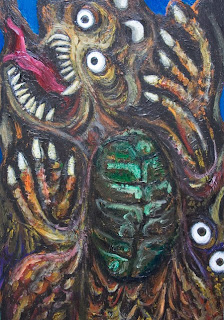 But most will have encountered these adult themes at some points in childhood viewing. I remember seeing the middle chunk of Martin Scorsese's The Aviator when it first came on TV; now that was a scary experience. Seeing Leonardo DiCaprio, and bare in mind Titanic was one of my favorite films as a kid, sitting alone in a car in some sort of construction zone trying to spell out the word "quarantine". The guy seemed broken, and unlike all those kids movies adventures where the problems would be fixed there seemed to be no fix for this guy. I asked my dad after that scene "is he going to be ok now?" to which he simply replied "I don't know". Those quick snippets of the adult world, peering outside of my parent-created bubble, were the extension of those early scares: it went from the mummy shrieking as he came to life for the first time to Leonardo DiCaprio trying to say quarantine.

Other mediums have a much harder job trying to scare you. I asked for a scary book as a child and was handed "The Others" by James Herbert, which I never read a word of. The cover looked scarier at the time to what in retrospective I guess was in the book. And video-games have it hard too; my favorite genre of game as a child, my medium of choice, was survival horror. I would buy everything I could: spurred on by Resident Evil and Silent Hill, two great franchises that in a moment of history repeating itself would become swamped under a barrage sequels and eventually just became part of the machine. I never did get scared by these games, but I do believe no other medium can create the atmosphere games can; the eery music of Resident Evil as you explored a mansion and the pixelated graphics of Silent Hill as you travelled around a fog covered town. Both environments, even through their open-ended nature, felt more claustrophobic than any film has yet managed.

Music on the other hand is one that I predict most people won't believe can be scary unless they've experienced it themselves. I remember cruising around Burnout: Paradise, still my vote for the best racing game ever, when the games soundtrack would sometimes throw "Would?" by Alice in Chains at me. I had heard of them through my intense Nirvana fandom during the years leading up to that date, but never heard the music. It was the heaviness of the music. The vocals, only half understandable, throwing out lines like "I know I made a big mistake, try to see it my way". The backing vocals fading into the background like some spectral being swooping over the stretched out images of madness the music conjured up. I doubt people are scared of music in the same way as other mediums - no intense shaking or crawling into their parents bedroom in the middle of the night - but it's an unnerving feeling, like those adult themes, that makes you feel like you shouldn't be listening. Alice in Chain's "Rooster" could easily be called scary too; listening, at least when I first heard it, felt like stumbling into some obscure band's page on the internet that was unsupervised by anyone else.

But scary things don't last. Listen after listen and you find a comfort in these scary songs. As if the scariness would turn off anyone else you know, and that songs' a new hiding place where no-one will ever think to look. And The Shining doesn't feel as cold as it did when I watched it late one night years ago; I really felt the cold of the snow in that film back then, I saw it all from Danny (the young boy)'s point of view. But now it's about so much more; about a writer succumbing to his demons, about a mother and her primal instinct to protect her son, and about Stanley Kubrick and Jack Nicholson and Shelley Duvall and that time and place. As with all horror familiarity and greater knowledge make you befriend horror more than fear it.

What's strange is I miss the feeling of being scared; maybe it's all part of that innocent childhood we all wish to return to, or maybe feeling scared, I mean really scared: sweating and panicking and worrying for safety, it makes us all feel alive. More than any other emotion, because it's the one caused by our lack of control of the things around us. And that's why Halloween's so great, and so important, because it's that fantastical side of horror; and as much a protection of innocence as Christmas, only Christmas sticks around, starts to become more hassle of course, but it's a constant link to childhood: a day when everyone tries their hardest to preserve innocence whether there's kids around or not. But Halloween is lost, it gives way to real horror, to the fear of heights or parents running away or people coming into the house late at night, but for just a few golden years Halloween protects all kids from the real scary stuff. 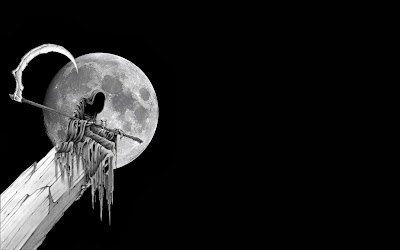