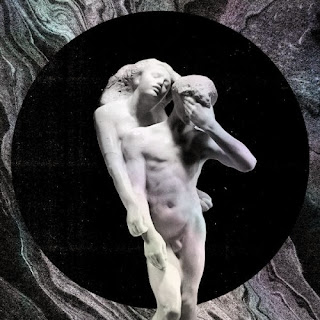 Reflektor was my first Arcade Fire experience, before this their cold outlook always leading me to turn away, so excuse my unfamiliarity with exactly what an Arcade Fire is. Not that Reflektor helped in any way; the production is deadpan throughout, reminding me of other apparently big rock albums that came off lifeless, a la Led Zep's Physical Graffiti and Alice in Chains self titled album, yet both of those felt like structured jam sessions whereas Reflektor certainly has the build of an album, an operatic feel in places and a "big" feel to it, but too many tracks just turn to mush: gone from the brain the second they stop and melded together with the tracks left and right.

Not to say there's no highlights here. Arcade Fire have helpfully separated the good and the bad by putting them on different discs - albeit with one or two crossovers - with a straight-up rock disc (I'm guessing this is "vintage Arcade Fire") and a second disc I just couldn't work out. But first the good: the lyrics, most of which take on very broad themes of social alienation, came across very teen angst in the least annoying way possible. On "Normal People" things do sound a little 16-year-olds-diary but I'd be lying if I said I didn't like the us against everyone else vibe ("Is anything as strange as a normal person?/Is anyone as cruel as a normal person?") but in the end it works because it changes the tone ("I've never really ever met a normal person...Like you! How do you do?") becoming part love song without any real loveliness.

The lyrics that work best here all tread the line between relatable and asking-for-sympathy ("We Exist" about being ignored by those "normal people" is an example of the album nearly falling into this) but pull themselves up by taking some unique angles on what at first seem like vague problems ("Daddy it's fine/I'm used to 'em now/But tell me why they treat me like this?"). The lyrics ask a lot of questions (which are more for the band themselves than us) and usually involve a lot of repetitions of the title phrase - which keeps things flowing - while the best vocal moments are the backing vocals from Régine Chassagne who's voice acts as a lighter touch from the heavy instrumental sound, and the chant like lyrics that open "Joan of Arc" one of the most listenable tracks on the album.

The biggest compliment I can give the band is they don't waste their great numbers. They've got guitars, drums, vocals, keyboards, synthesizers and who knows what else to play with here and the tracks usually start out quiet, lead by a rhythm section or drum beat, which is built on by lead guitars and eventually keyboards and others. The adding of elements one-by-one makes the songs a lot more fun than they should be; the repetitive riffs don't seem like they could handle an album loaded with long tracks (most run over 5 minutes) yet the build up of different layers adds something to each track, even if what each individual instrument is doing does get lost in the mix.

Through most of this Arcade Fire has soundbites pop up, mostly linking to their live shows: an announcer, a crowd roaring, even a slurry Win Butler chipping in to ask "Do you like rock'n'roll music? because I don't know if I do" which does make you think but about what I'm not sure. A recording from their performance on Jonathan Ross shows up near the end of one track and you'd think the fractured sound would have a similar effect to Kanye West's Yeezus production but it doesn't; the unlively production effects say very little other than the want from a band to say more than their music does.

Yet as disc two starts it looks like it's all been leading to something with the first track "Here Comes The Night Time II" which does away with guitars and has a slowly building piano score, with the synths turned up too. It's here the focus isn't on the two greek statues on the front cover but on the deep unexplored space behind them. The whole track is building up and up as Butler repeats the title line along with the most moving line on the album "I hurt myself again, along with all my friends". The track has a floating feeling; the band is more loose here than anywhere else and the track is both the most experimental and most emotional on the album; and tellingly it's also the second shortest here too, all done in less than 3 minutes. Unfortunately Reflektor goes completely off the rails from here.

The album sinks here under the weight of references to the greek story of Eurydice and Orpheus, tracks that all stay over 6 minutes, and a more "epic" sound that only becomes repetitive quickly; and the album eventually self destructs on it's final track "supersymmetry" the most meaningless lyrically other than it's reference to the albums title. The real problem here though is that this 11 minute track is actually finished after 5 minutes, the rest is transmission sound effects. It's supposed to be the big payoff to the albums productions yet it ends up weighing the whole thing down.

It's hypnotizing stuff though. That's what the grandiosity does for it; it keeps people sticking around long after the show has ended. It's like those last 6 minutes of near silence on the album; I listened to them more intently than anything in the last hour of music, but I never really got much back. But it's easy to keep returning to this album, or should I say it's easy to feel that you have to. But in the end what's sad is that there's a disc of great rock music here; 7 tracks that feel big without any added weight, and is where Arcade Fire should have left it. We've still got those songs, but a lot more that we didn't need too. 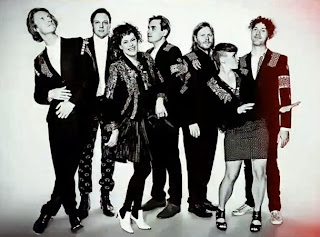