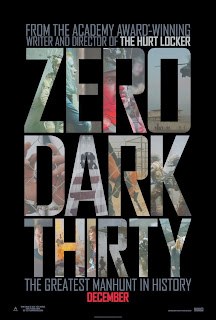 I'm part of a group that is about as far away as you can get from the one the makers of Zero Dark Thirty were aiming for. All Brits could do when the film released last year was point and snigger at the American patriotic propaganda it must be. The arguments over torture flew over our limey heads meaning all we saw was America making the movie everyone knew would be made-made quick enough for the whole country to wallow in pride, and make Obama look good while doing it.

The problem is I was always going to watch Zero Dark Thirty anyway because that's the curse of being a film fan and having a new movie by someone like Kathryn Bigelow come out. I had mixed feelings about The Hurt Locker; it took an interesting perspective on the war in iraq, which has still seen surprisingly little coverage in movies, with it's character study of an adrenaline junkie bob disposal man, which worked on paper, and as a good look into a war we're all very confused about, but failed as an intense war film. Locker did deal with some heavy stuff but became too obsessed with it's characters, which is why Bigelow's fiction-as-journalism directional style felt too light on it's feet, because there wasn't enough journalism. It presented everything with the melodrama of the story while the filmmakers seemed more interested in the more medial military details. On the other hand Zero Dark Thirty is all medial details. You go in expecting gun fights and interrogations (controversial interrogations that is, which sound even better) and you get talking in boardrooms and devising plans; it doesn't so much divert your expectations as it makes you feel stupid for thinking the real thing was going to be as Die Hard as we all secretly hoped it would be.

The other thing that Thirty does different to how you'd expect is being so simple. The hunt for Osama Bin Laden sounds pretty complex, and at the very least we know it took a long time, hence I went in for a JFK/Zodiac-style mess of information. Both of those films had more characters and more points of view, but then again both those films didn't know where they were going, whereas Thirty takes us on a journey we already know the ending of with the preciseness of an SAS mission. So instead of a blur of dates and names we see most things from the perspective of Maya (Jessica Chastain) who's in charge of finding Bin Laden. She lacks a real personal life, instead replaced by an amazing drive to get the job done, which makes her actual moments of personality all the more thrilling; referring to herself as a motherfucker in an important meeting is a highlight. Maya lacks much character but she is a great character, and not just because of Chastain who works much better with more slight moments and gestures than screaming and shouting but because a huge character would have put some sense of desire into catching Bin Laden, but Maya wants to catch him for no more complex reasons than those of your average person on the street; he's a bad guy, he wronged many people, he deserves it, and it might just help with the war. The war in this case is as much an unexplained background force propelling people's actions with it's vague bluntness as it is to the real life public.

In the final third of the film we follow a SEAL squad (headed by Joel Edgerton) as they're sent on the mission the whole film's been building up to. In contrast to Maya these guys have the most exciting part of the film; finally we're out of those grey office blocks and into the suck. This section seems like it would be hardest to film, being that we all know how it ends, yet instead of getting things over and done with Thirty lingers on every small moment of the mission, which has even more impact when you think of the pace of the film preceding it. And you think the film might try to divert your eyes again, Apocalypse Now-style building up to something a lot less explosive than expected, which it does in some ways: the actual kill is more slight than the soldiers opening the door on their way in, and it isn't even issued by our expected hero Edgerton. But this film doesn't divert expectations. I mean how could it have? It would never have got away with it. After all that's why this section works so well. It drags things out and brings us right into the moment, and gives the moment the gravity the rest of the film hasn't allowed it to have; we haven't been waiting 2 and a half hours to kill the bad guy in the movie anymore, we've been waiting 10 years to kill Osama Bin Laden. I don't think people watched this section so intently because they felt scared or excited, I think they kept watching, wondering if it had all been worth it. Forget the news reports and the celebrations that followed, we've already had all that, in this section we watch to see what it was all actually for. The first time you watch Thirty you witness Bin Laden's killing in detail for the first time, but your reaction to his death, whatever it may have been, already happened more than two years ago.

In the end I really liked Zero Dark Thirty, more than any other film last year actually, although it takes a while to set in. Both JFK and Zodiac also took real stories of great cultural weight, so great that both films didn't even have names, just the names of their case files, yet they didn't shed any light on those cases, they simply made stories, some elements even fantastical, out of their confusion. But Zero Dark Thirty presents the Osama Bin Laden story in minute detail; I had no questions left when things were finished. Which makes Thirty the only film I can think of that tackles 21st century information-finding well; because we no longer have the imagination to be left guessing; we need to know everything, every detail, or it wasn't a worth-while story at all. Bigelow doesn't use Thirty to criticize this change, she actually uses it to make a great case for it; making us care for the how, not the what.
Posted by Bigplatts at 21:59