Asher Roth: King of the Blumpkins 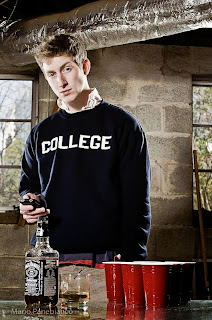 Back in 09 Asher Roth released the scourge of all frat boy wisdom and even in it's drunken vagueness the best piece of romantasized American college hijinks that's hit the mainstream in recent memory with 'I Love College'. At the time I felt almost embarrassed liking the song, as catchy and fuck-it-and-worry-about-the-consequences-later as it was - it betrayed my grundgy rocker code and possibly even the code set down by being a mature-for-his-age Brit who was too young to even be attending these parties. It fell off the radios quick, because alas Roth still isn't a household name, and his white skin is his biggest claim to fame in the rap community, although before it disappeared completely I saw the song playing late one night while channel surfing and quickly scribbled down the name, oblivious to me at the time, in the contents page of a magazine I had been reading. Somehow I managed to lose the magazine, the song forever hanging there as a piece of insight into the adolescent world I would annoyingly never hear again, not aided by the fact that the man behind it hasn't made much noise since; there's whispers he'll release another album next year, which will be his first since his debut in 09.

Luckily it wasn't lost forever when I found 'I Love College' again earlier this year, completely by coincidence, and discovered it's just as fun as I remember it. And last week after finally getting around to watching the fantastically inspiring Eminem movie '8 Mile' which sent my mind into delirious fantasies of being a famous rapper, I listened to Roth's debut album, which has him 'Asleep in the Bread Aisle'. And what a fucking gold mine it is; everyone thought music was in the shitter in 2009 which must have went some way into making people miss sight of this treasure trove of unapologetically adolescent party rap and soothing confessionals that was right in front of their faces.

My wannabe rapper fantasies carved a mini-narrative into 'Bread Aisle' which I suspect was Roth's rapper fantasy too; or why else would things kick off with 'Lark On My Go-Kart' which is the most aggressive track here, Roth throwing out swears and adolescent vulgarities as fast as he can. It's the most black sounding of all the tracks here, and the most intensely fast; Roth gets it right when he complements his flow as "oh so sharp". In the fantasy this is the start of the night; darkness has descended and the first hits of drunkenness have begun to take effect. This is taking your shirt off, jumping on a table and yelling "Look guys, look how good I can rap". This track needs to quickly get everyone in the room and in the know; which it does with a real intensity.

Things never do reach the intensity of the opener again, which is ok as we quickly delve into party land. Standing on the table this is what everyone is wanting. The aforementioned college track delves into it's own delinquency and through sheer self belief holds it's head up high. You have the whole room chanting "Chug, chug, chug, freshman, freshman, freshman, do somethin crazy! do somethin crazy!" and things aren't any less delinquent on "She Don't Wanna Man" where Keri Hilson becomes the only featured artist on the album up to snuff. You'd think this fantasy in which you paste your head of Roth's body would belittle an artist who is surely well-tuned in his craft yet The Asher Roth Formula almost supports this open invitation; almost every track has a moment where Roth's flow wobbles, when he raps "All up in your fridge eating left-over shit/Tuna sandwich, butterscotch, crimpets/Cheetos be my choice of chips/I enjoy for a bit" things seem to knock him off balance for a second. It brings you out of the music, something you'd think Roth would want to avoid in the name of professionalism, although these moments find their way onto a good variety of tracks on here; in 'La Di Da' another party-ready highlight he raps "so many questions unanswered, I don't understand/Could you please explain sir" something doesn't quite seem right. Roth never falters when it comes to self confidence, of which he has in droves, but these moments where we are reminded he's not a master manage to break the barry that rap, the hardest genre to supplant yourself onto because of the raw talent required, has set up.

By now everyone's hammered out of their minds; they've never heard shit this dope. There's nothing left to prove, and no-one left to entertain. Now you've got some things to get off your chest, which could very easily fuck up in Roth's face although this, the most interesting aspect of the album, makes the case for him as smarter than you thought. For a reference point: during the final rap battle in '8 Mile' the end-boss battle type moment the whole film has been building up to, Em finally spits some smart stuff as he recounts the tragedies we have watched him slug through during the rest of the film to the surprise of his opponent who was planning on using such quips himself. Em then turns the gaze on his opponent and spreads the word on this guy's life, which in the world of this film come as great insults, the exact lines being "But I know something about you/You went to Cranbrook, that's a private school/What's the matter Doc, you embarrassed?/This guy's a gangsta? His real name's Clarence/And Clarence lives at home with both parents/And Clarence parents have a real good marriage". This could all be directed at Asher Roth, a privileged white suburbanite college graduate who has better college parties than you. The lack of any B-Rabbit style tortured life story could be the butt of the joke, but then look around and you'll see your in the house of some over-privileged prick who's parents are out for a conveniently timed business trip, not in ghetto clubs or spitting it to a very hostile crowd somewhere along 8 mile. Roth's rap is unique in it's laid back nature and it's lack of even sarcastically-swung aggression; which if you think about it for a second makes sense for a kid who isn't rapping to provide for his daughter or prove himself among a club of all-black people. That's Roth's music's unique selling point and what makes him so easy to impose your self on; his raps, without any larger-than-life persona spilling into the lyrics, focus solely on his music and the messages he gets across that are so frequently passed off as "privileged white people problems". It's not that these problems need a spokesperson, they most surely don't, but it's nice someone is getting them across anyway, and in such an unashamed fashion too.

Eventually the night starts to drone-one and the party-goers are starting to slow down; it's the perfect time to start singing "His Dream" which tells the story of an older man reflecting on his life with a few regrets, mainly centered on leaving behind his dreams to focus on being a good parent. It's scored with a backing track which smoothly fits the lonely melodrama of the story. The themes here are big, and it's place on the album can clearly be read as a concept: "This is the emotional one; the one that's gonna make all the critics teary-eyed" which is easy to say since Roth himself isn't caught in this bind, yet this track is so much more than that. It takes real courage in what your saying and that people will believe in it to put out lines like "So he's well aware how vital a father figure is/How big of a responsibility it is/To be a good husband and care for your kids/Never miss an event, helping them with their homework" but that's what Roth does, and even if it's done out of blind-confidence it's at least appeasing to listen to for the sake of hearing serious themes and not have to mock yourself or the song to feel alright about it. By this point the party should be in hysterics, and it is damn funny how far everything quickly goes from spring-break-college-party to this, but everyone's silent while you bust this one out. You've got them all listening, admiring even.

This fantasy's a nice one to have, of being a cool rapper still waiting for a big break, and Roth creates the backing track for this fantasy with "Bread Aisle". And please don't get me wrong, I don't make this comparison as a form of insult; Roth's raps are solid but his flow has a rigidness to it that makes the structure fully visible; he doesn't possess the looseness of Slim Shady. Yet this means you can hear him trying. There's nothing wrong with a rap god, quite the opposite really, but Roth's style taps into a homespun remedy that hasn't yet been heard in the mainstream anywhere else. It's exciting to listen to this disc, listen to him thanking Eminem and also modestly comparing himself to him in "I As Em" as I suspect most rappers of his age do, and listen to him giving a brief chronicle of his life and his changing musical interests in 'Fallin' because his thoughts feel like they have a real weight to them. If Eminem or Jay-Z gave us such small details of their lives, their musical lives even, then we'd call it a cop-out, yet Roth's words take on a greater meaning because they feel so untarnished; he hasn't built a stage persona to stop himself from seeming small, he's simply stayed himself and rapped about things that are big.

And it's this same truth that lets Roth sing songs others simply couldn't get away with. In 'Sour Patch Kids' he raps "Donate your dollars, raise a dollar/Help a mother, save a father/'Cause poverty is probably our biggest problem/And it ain't gon' stop with Obama/To save the world we must start at the bottom" which would sound like the-big-man-pitying-the-small-people if it came from a giant such as Jay-Z and would sound like a inside joke if it came from the likes of Kanye West, yet I can do nothing but believe Asher Roth's aim is true. In 'Last Man Standing' a single which Roth released with Akon in 2011 he says "Face it, I didn't want to be famous, but that's the way it is" although we've had 10 years of Eminem giving us the same schtick to know that this is bullshit, only Roth knows we know it's bullshit. It's said because that's what rappers say, and it's probably what we'd say too, but you'd have to ask yourself if you'd be as unfussy about it as Roth is. Going back to those sour patch kids, Asher Roth raps "But money doesn't mean/A damn thing to me/I just want to be/I want to be free" and fuck it, I believe him.
Posted by Bigplatts at 21:08